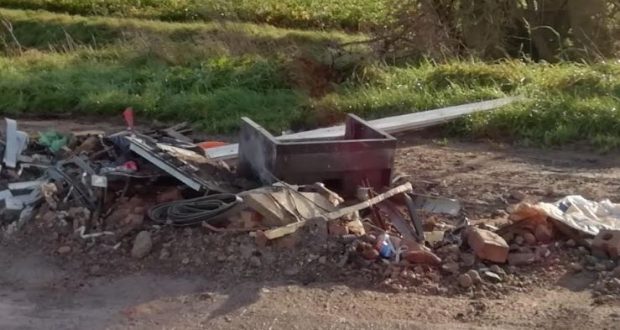 Fly-tippers who dump rubbish around South Holland should have their cars ‘crushed on telly,’ according to the leader of South Holland District Council.

Members of the council were discussing the recent prosecution of a West Pinchbeck man for fly-tipping in Surfleet. He was fined £200.
Coun Chris Brewis said there needed to be some ‘serious dialogue’ with other district councils in rural areas about using the nearest recycling centre.
“Maybe we could look at re-starting the Saturday collections in some areas,” he said.
Council leader Lord Gary Porter said the arrangements had to be dealt with at county level and he would fully support any moves in that direction.
“We could get our communications team to run something more proactive to encourage more people to report when it is actually happening rather than afterwards.
“What we really need are enforcement powers that have got some real teeth.
“Small fines that are the price of one skip do not deter people from doing hundreds of fly-tips,” he said, adding that ‘crushing their cars on telly’ would be better.
Coun Brewis said that joint refuse collection points were also a problem and prone to being fly-tipped.
“It has got to be every authority pulling together. I have reported more fly tipping since March than in the previous ten years.”
The man fined by the council for the Surfleet fly tip had been identified as the offender as the incident had been witnessed.
“Regardless of its size or contents, we cannot and will not tolerate any form of fly tipping in South Holland and I am pleased that our investigations have allowed us to identify and fine the guilty party in this instance,” said portfolio holder for communities and facilities Gary Taylor.
“It also shows the importance of the team receiving quick and detailed reports,” he added.
Reports can be made on 01775 761161 or by the website www.sholland.gov.uk