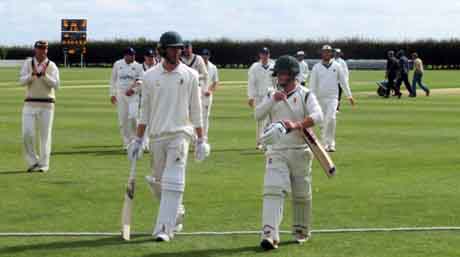 Lincolnshire CCC took a maximum 24 points from their final match of the season to guarantee themselves a place in the restructured Eastern Division One for next season.

The county side entered their final Eastern Division Championship match of the season knowing that victory over Bedfordshire at Grantham would secure their spot.

On winning the toss, Bedfordshire elected to bat. Two early wickets by Usman Arshad put Lincolnshire on top and Adam Tillcock, captaining the side in the absence of Carl Wilson, then took the next four wickets to leave the visitors on 208-6.

All the time, however, James Kettleborough stood firm – passing 100 and finding strong support from the Bedfordshire lower order with

Kettleborough finally became Tillcock’s sixth victim for a fine 154 as the visitors’ innings closed on 360-9 after their allotted 90 overs.

Lincolnshire had a tricky seventeen overs at least to negotiate before the close of day one.

Openers Ben Coddington and Jack Timby took the total past 40 before Bedfordshire struck to take three quick wickets as Lincolnshire closed the day on 69-3.

Louis Kimber (Cleethorpes CC) and Nic Keast (Cuckney CC), both not out from overnight, then began the task of putting Lincolnshire into a commanding position.

This they did to devastating effect, steadily at first then completely dominating the Bedfordshire bowling attack. Together they added 209 for the fourth wicket before Keast was dismissed for 109, his maiden century for Lincolnshire.

Kimber continued to attack and was seventh out for 177, an innings which was completed off 189 balls and contained 17 fours and eight sixes.

By close of play on day two, Bedfordshire had reached 43-2, still 29 runs in arrears. Wickets continued to fall at regular intervals on day three and only the lower order of George Darlow (37) and Mark Wolstenholme (33) offered any great resistance.

The visitors were finally dismissed for 203, Arshad, Matt Carter and Tillcock all obtaining three wickets.

Lincolnshire then required 132 for victory with plenty of time and overs remaining.

The loss of two early wickets was a concern but Shiv Thakor (36 not out) and Sam Johnson (27 not out) saw the home county to victory by six wickets.