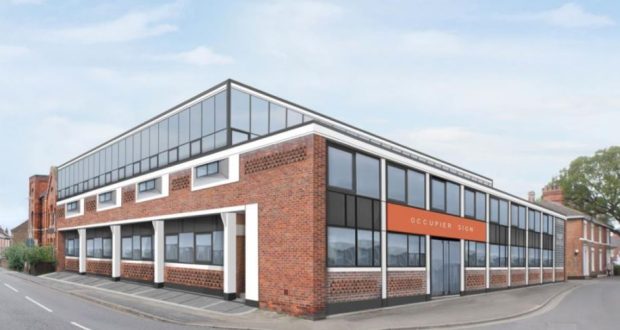 How the sorting office could look.

Ambitious plans to transform a derelict town centre building have been submitted.

The old sorting office in Spalding is a semi-derelict eye sore on The Crescent, but despite appearances it’s structurally sound.
Plans for ten flats and ground floor retail units are with South Holland District Council.
“Originally built by the Royal Mail Post Office in 1961, the building provided use as a sorting office. It was abandoned in the 1990s,” says a supporting design and access statement.
“The proposal seeks to celebrate the building and give back life and soul to its former self.”
“At present the site and building are derelict, neglected and deteriorating from the exterior as well as severely decaying internally. It is evident the site and building would benefit from urgent repair and refurbishment to help rejuvenate The Crescent,” says the statement.
The proposal sees five one-bedroom and five two-bedroom flats above a ground floor retail area.
The plans retain much of the exterior of the building, utilising the facade.
“Externally, there is minimal change to the facade, keeping existing fenestration and brickwork intact. Some delicate additions of modern features and textures have been introduced by the use of protruding bricks, glass bricks and render finish”
There is no resident parking, with nine spaces for the retail units.
The site is within a Conservation Area and the application says: “The aspirations are to give life back to the building, by unifying the street frontage,” says the statement.
The site has been subject to several planning applications over the years, and some have suggested demolishing the building.
South Holland District Council gave permission for it to be demolished ten years ago, but nothing came to fruition and the application has expired.