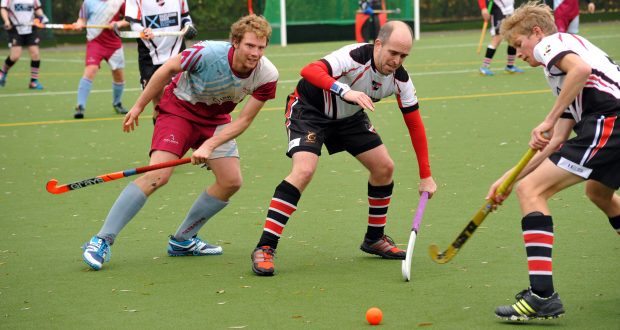 Spalding 1st kicked off their 2017 East Men’s Hockey League fixtures with a fantastic 5-2 thrashing of fellow Premier B high-fliers Blueharts on Saturday.

Showing no sign of rustiness following the winter break, Spalding goal machine Stuart Cunnington inspired the victory with yet another hat-trick that leaves his side third in the table.

Hosts Spalding had the better of the early exchanges and deservedly went ahead when Cunnington buried an excellent short corner flick after just seven minutes.

Skipper Josh Rowbottom then dived full length to turn in a pin point cross from Glenn Richardson for 2-0, but Blueharts hit back to make it 2-2 by the 25th minute.

However, Cunnington fired home another short corner just before the interval to give Spalding a narrow advantage.

That man Cunnington completed his hat-trick two minutes after the interval with another great short corner strike and, although Josh Olphin made a number of fine saves, Spalding sealed the win late on when Connor Allen netted from the penalty spot.

Down in Division One, Long Sutton’s game at Harleston Magpies 2nd didn’t go ahead.

Spalding 3rd’s clash with St Ives 1st did beat the weather – but they slipped to a 2-1 defeat against the league leaders.

Having fallen behind early on, they refused to fold and levelled before the break though Steve Rogers, who slammed the ball home.

St Ives started the second half strongly and were soon putting pressure on the Spalding defence of Willam Borst, Martin Perkins and Aaron Borst. But they held firm and, with keeper Nathan Davy in fine form, they failed to find the net which spurred Spalding on.

However, with 15 minutes left St Ives dispatched a penalty flick to take the win.

Meanwhile, table-topping Spalding 4th made a flying start to the second half of the Division 6NW (N) season.

They made short work of their fixture against basement boys Bourne/Deeping 6th, winning 9-0 thanks to hat-tricks from Shaun Dewing and Max Bland.

In the same division, Spalding 5th returned to action with a 3-0 loss against Bourne/Deeping 5th.

Spalding went into the game with eight players aged 13 or 14 and they put in an encouraging performance.

Meanwhile, the all-Long Sutton clash between the 3rd and 4th sides was a real thriller.

In the end, it was Sutton 3rd who emerged as 3-2 winners to keep themselves in fourth place, leaving Sutton 4th down in the bottom two of the standings.