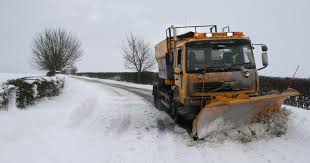 Firefighters could be called on to help keep the county moving in bad weather.

The idea of having retained fire crew members helping out with clearing roads and footpaths of snow and ice is just one of a raft of measures being looked at in a bid to tackle the shortfall in qualified LGV drivers available to drive gritting machines across Lincolnshire.
Bin lorry drivers and even RAF and other armed forces personnel are other options put forward by a county council winter maintenance working group, which has been looking at cost effective ways of keeping roads accessible during ice and snow.
As well as the lack of qualified LGV drivers needed to man the gritting trucks, the group has also been looking at possible options to reduce the number of necessary drivers and driving mates and carrying out a review of severe weather equipment.
Figures presented to the group suggest new legislation in 2014 has seen a 20 per cent drop in the number of qualified LGV drivers and the seasonal nature of gritting work means it is harder to find suitable staff.
A move by council contractor Kier to attempt to use Army Reserve drivers has also suffered as they are not now trained to LGV standards.
A gritter driver recruitment drive has been held by the county council, but numbers are still low and alternatives are now being sought.
This could include inviting council part-time staff or those on flexible retirement or considering voluntary redundancy to retrain as LGV drivers.
Problems are exacerbated by the need for gritters to be “double manned”, with a driver and mate.
The working group is looking at the possibility of using county council staff as driver’s mates.
Reducing the number of routes covered by the gritters in the event of severe weather was also considered, leaving untreated routes relying on self-service grit bins and one tonne salt sacks.
Members decided there was a need for a review to see if current severe weather routes could be made more efficient but supported their retention, while agreeing to cut the number of “spare” gritters from five to four.
A report of the working group’s suggestions was considered by the county council’s Highways and Transport Committee on Monday.