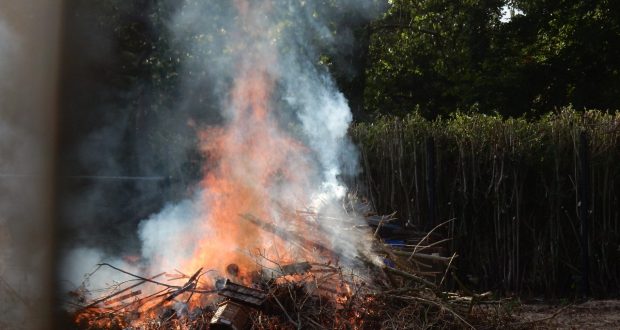 One of the blazes.

A man has been fined over £5,000 after he burnt waste illegally for months on end at his home.

Adam Ivory, 38, of Magnolia Cottage, Tydd St Giles stored and burnt waste without a permit between April 2019 and September 2020.

A neighbour reported that commercial waste was being burnt at the site every 3-5 weeks where it was being piled up with accelerants.

Among the items set alight were plastics, pallets, polystyrene, and plumbing waste, the Environment Agency said.

Fires at the site were reported as lasting for hours on end, the air described as being “toxic” as a result.

Concerns were reported about the impact of the blazes on a neighbour’s health as well as that of their animals.

The Environment Agency wrote to Ivory on two occasions providing advice and requiring him to remove all the waste on the site. Ivory told officers in March 2020 that the waste had been removed.

However, further fires then took place in April 2020 and continued after he was questioned in July 2020.

In mitigation, Ivory said in court that he had been running his business legitimately for the past 18 months.

Ivory pled guilty to operating a regulated facility without being authorised by an environmental permit under regulation 12 of the Environmental Permitting Regulations 2016.

He also pled guilty to keeping controlled waste on land in a manner likely to cause pollution of the environment or harm to human health. This is contrary to section 33(1)(c) of the Environmental Protection Act.

He was also told to pay a victim surcharge of £190 and costs totalling £4,302.  Sentencing, magistrates described the site as “unsuitable” and said it had been a serious risk to public health.

They said Ivory had acted deliberately over a prolonged period and had continued to light fires, despite letters advising him to stop.

Peter Stark, Enforcement Team Leader said: “Burning waste can have a serious impact on local communities and cause untold damage to the environment. Especially in the quantities and repeated waste fires in this case.“

“Ivory was given advice on a number of occasions and told to remove the waste legitimately from his property but failed to do so.“