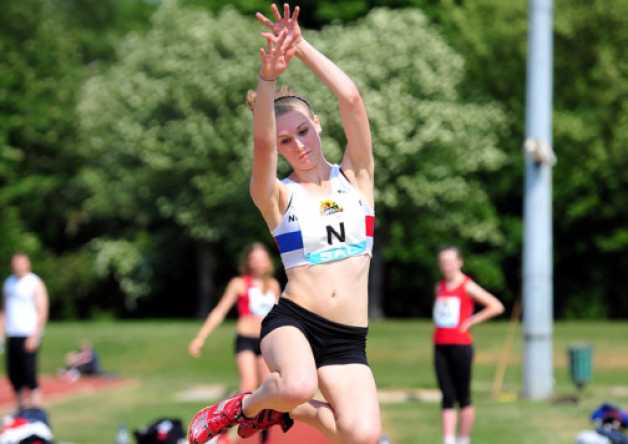 Field athletes to the fore for Nene Valley

Finishing third behind the host club and a strong Southampton AC outfit, the Harriers were indebted to their jumpers and vaulters with wins in both the triple and long jumps too.

Angus Bowling won the men’s pole vault with a clearance of 3.15m while his coach Richard Phelan went over the bar at 2.95m for his B win.

Devon Spencer went clear at 2.30m to take first place in the ladies’ vault with Emily Maltby winning the B competition after clearing 1.25m on her pole vault debut.

Maltby enjoyed a day of firsts, winning the long jump with a 5.14m leap and the triple jump with a distance of 10.75m.

Miranda Cipriano and Callum Winchester-Wright both took maximum points in the men’s triple jump with distances of 12.58m and 12.41m respectively.

The throwing competitions proved to be a happy hunting ground for the Nene Valley ladies with four athletes recording wins.

Andrea Jenkins won the discus with a distance of 37.18m while Becky Hall won the B competition with 29.63m.

Lydia Church threw 11.41m for her B shot put win and Kelly Lawrence won the B hammer with 41.57m.

Emily Maltby secured an incredible fourth win of the day in the 100m hurdles, winning the B race in a time of 17.8. Zoe Lucas won the A race with a 14.8 clocking.

There was also track success for the men with Sean Garmory clocking 52.1 for his 400m win.

Simon Achurch rarely comes home without a maximum points haul in at least one throwing event.

* John Herbert came out on top in the battle of the Harriers winning the Thurlby 10k from Nene Valley’s Alex Hampson on Sunday.

The pair set the pace up the notorious Swallow Hill early in the race, and were still together into the eighth kilometre when the 49-year-old

“I won for my mum who sadly has been diagnosed with cancer.” said Herbert poignantly. “There was no way Alex was going to beat me. We had a good battle but I finally broke him at about 7.25k.

“However, it was good he was there as we both kicked on for good time.”

Nene Valley Harrier Oliver Bowling finished 12th in a time of 42:17 while his younger brother Felix finished fourth in the junior 3km race in a time of 9:59.

Peterborough AC’s Wendy Perkins was the 3rd lady over the line in the 10km race with a 46:50 clocking.