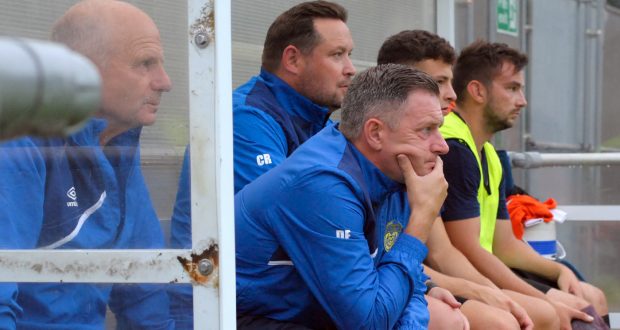 FRESHENING THINGS UP: Dave Frecklington wants to keep his players on their toes. Photo by JAKE WHITELEY

There is no room for complacency in the Spalding United squad as their title charge enters the home stretch.

That’s the verdict of bullish boss Dave Frecklington, who is hoping to add two new faces to his squad over the next week to ensure there is competition for places in the final 16 Evo-Stik NPL First Division South games.

He’s stated that process by landing talented King’s Lynn Town frontman Leon Mettam in a season-long loan deal on Tuesday night and will this week put in a seven-day approach in for a defender.

Mettam, formerly of Tamworth, was listed for loan by Lynn boss Gary Setchell after they lost 6-1 at home to Weymouth on Saturday.

Frecklington has long-wanted a striker to compete with Bradley Wells and Bradley Barraclough, but must now also move for a defender in the wake of Neal Spafford’s red card at Rugby Town on Saturday.

The ex-Lincoln United chief has branded Spafford “stupid and petulant” for aiming a punch at an opponent and doesn’t want the club to be associated with that kind of behaviour.

Frecklington has also issued a warning to a few of his other players by claiming one or two of them are coasting.

He’ll not tolerate that and feels the time is right to freshen up his squad, who currently sit second in the table – six points behind leaders Shaw Lane AFC having played three games more.

“I know Leon well,” said the Spalding supremo. “About five or six clubs were after him, but he wanted to come here.

“It’s a loan deal as he’s got 15 months left on a contract at King’s Lynn.

“He’ll be a big one for us and I’m delighted to get it over the line.

“As for the defensive situation, Neal’s stupidity has put us in a tough situation at a time when we could do without it.

“It was a moment of petulance. You can’t go around aiming punches at players, it’s not something I’ll tolerate.

“It’s also something the club doesn’t want to be associated with and is totally unacceptable.

“He’s banned for four games now, so we’re forced to go into the market again.

“It’s important that we add a few fresh faces, I’ve sensed a bit of complacency from one or two of the lads.

“I got the feeling that they felt they were guaranteed a start in my side, which will never be the case.

“I’m expecting every game to be a tough one and we need to be putting in even more effort than we have been.”

Frecklington also took the chance to praise two of his key performers from the win at Rugby last weekend.

Striker Barraclough broke his duck for the club with a fine header from a Lee Beeson cross – and it proved to be the winner.

Beeson was named man of the match, with the quality of his delivery impressing his manager.

“I’m delighted for Barra,” added Frecklington. “It was a great goal – and we’ve always known he’s capable of that.

“He had a tough time of it with injury earlier in the season and it was always going to take him time to find his way here.

“His crosses are a dream for our strikers and he’s made a massive impact since coming here from Stamford.”