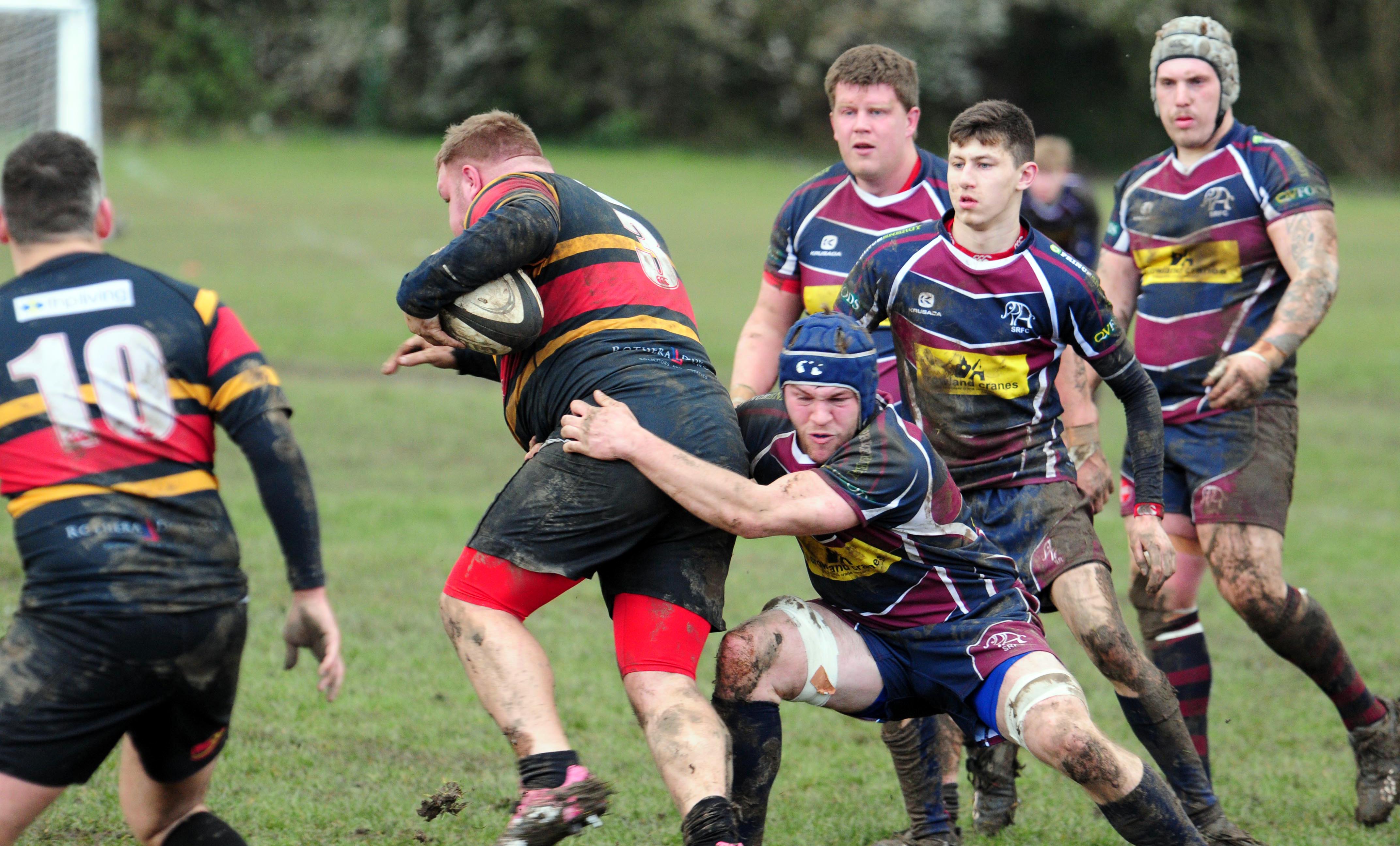 TITANIC TUSSLE: There wasn’t much between Spalding RFC (claret and blue) and West Bridgford. Photo by ADRIAN SMITH

Town’s Memorial Field reverse allowed Mansfield to claw back a point on them following their agonising 13-12 home defeat against second-placed Dronfield, which earned them a losing bonus point.

With Mansfield having a game in hand on Spalding – against basement boys Bakewell – it looks certain that the relegation battle will go to the final day of the campaign.

Saturday’s game was an enthralling classic, full of good rugby and total commitment from both teams.

The final score failed to tell the true story, however, with West Bridgford only cementing the points in the last two minutes with two converted tries. Up until then Spalding, although behind by a converted try, were always in the game and chasing a home win to ease their relegation fears.

It was a welcome sight for the home supporters to see Sion Williams back at fly-half, while Dan Adams finally earned a start at outside centre, having been selected two weeks ago after impressive displays in the seconds. Also in the backs, two of the younger players changed positions with George Douglas going to full-back and Tom Winch starting on the right wing.

The opening quarter hour was a case of both teams closing down space with the tackling not allowing any openings for either team.

Throughout the game Spalding’s lineout functioned well, with Ash Piccaver jumping at the front and Ash Anker soaring high in the middle.

Bridgford reverted to kicking and Douglas, deep in his own half, caught a high ball and immediately counter-attacked. 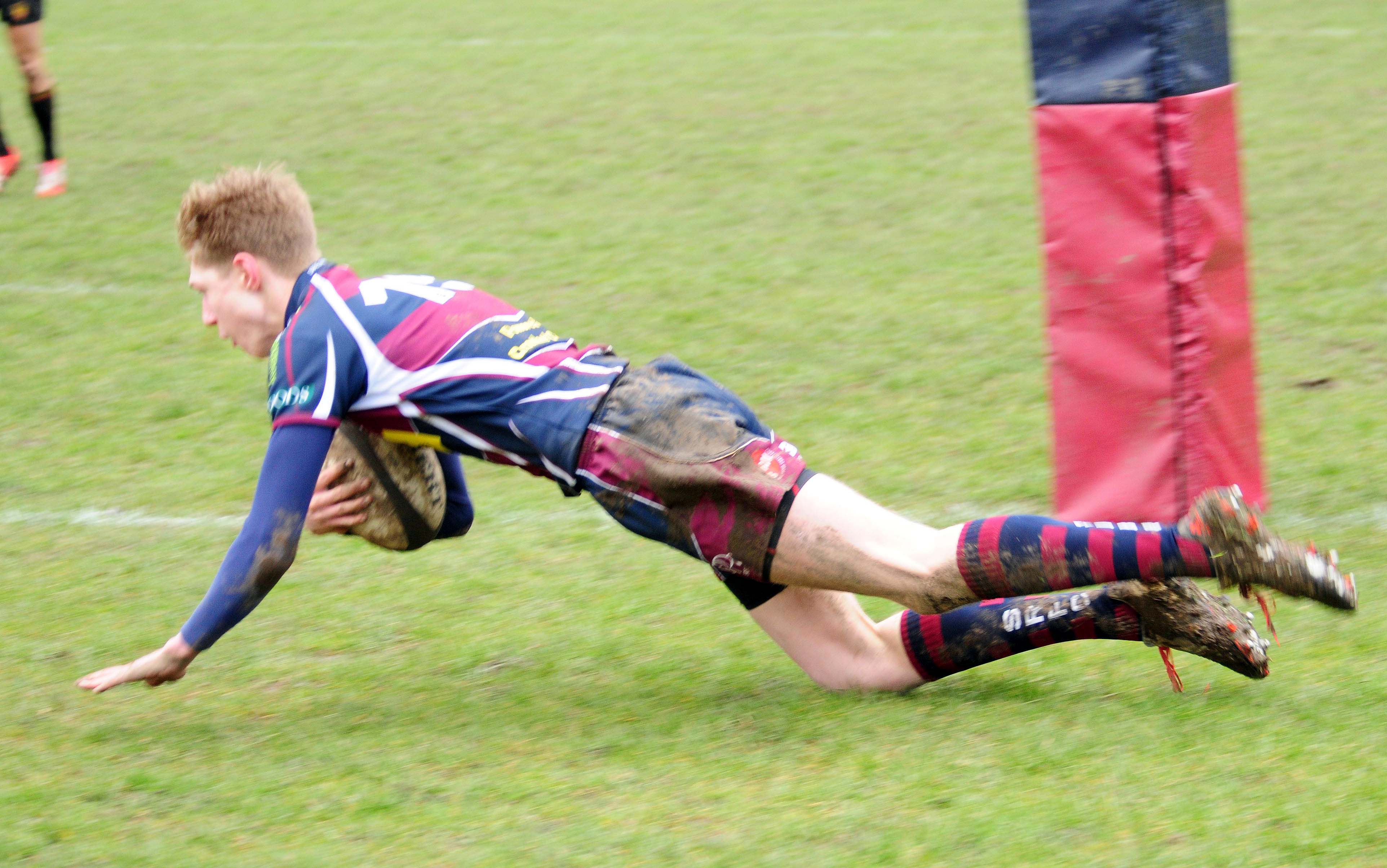 With a devastating burst of speed he went through the opposition’s first line of defence and changed his angle of attack to cut back inside and score an outstanding try, which was converted by Winch.

Stunned, the visitors’ response was swift, with their fly-half Danny Graney orchestrating a loop move in the backs to release winger Sean Crowe in for a well worked converted try.

The breakdown area was being hotly-contested by both teams, with Anker excelling in his battle with Bridgford’s number seven Adam Taylor.

Spalding scrum-half Shields was distributing the ball with pace, giving Sion Williams space to bring his centres into action.

Winch had a good run down the right wing, but the star was Douglas – as every time Bridgford kicked deep his handling was excellent and his stunning running from deep nearly brought further reward for Town.

However, the sides remained level at 7-7 at half time.

The start of the second half again saw both teams locked in a fine battle with both defences on top, but it was Bridgford’s fly-half who unlocked the stalemate with a break and a kick through on the right-had side for a converted try.

Undeterred, McHugh executed two good penalty kicks deep into Bridgford’s half as Spalding pressed for a score. However, poor execution at the lineouts resulted in lost ball.

Strong pressure, led by Adams putting in some excellent tackles, kept the heat on – as did Pete Waudby, who started to dominate his opposite number in the front row.

However, the visitors are not near the top of the league for nothing and they ran in two late tries to clinch the points.

Led by their scrum-half and fly-half combination, the visitors worked their way deep into Spalding’s half.

A good scrum and pick up at the base by Bridgford on Spalding’s five metre line saw a two on one advantage and their right winger was again in for a converted try.

Before Spalding could regroup – and with the last play on the match – the opposition fly-half saw Spalding’s guard defence in disarray as they secured a ruck and he sliced through to secure a bonus point win.

The Elephants now have a week without a match, but return to action at Stamford on March 19. Relegation rivals Mansfield visit West Bridgford on the same day.