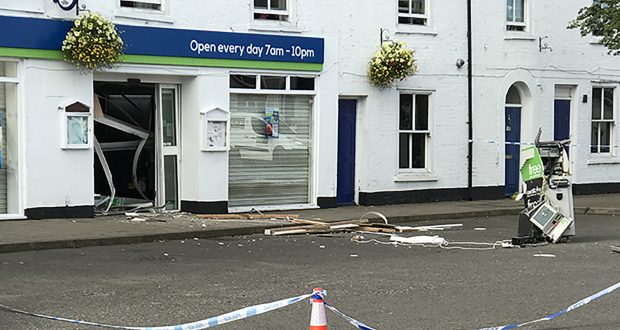 The cash machine was left in the road after the attack. Picture: Philip Green

Police are hunting a gang of ram raiders who targeted a village shop in the early hours of Tuesday morning.

The raiders hit the Co-Op in Crowland at around 4am and tried to take the in-store cash machine.

But they were not successful and the machine was left in the road.

A 4×4 vehicle used in the raid was also left close to the scene.

“It is believed three offenders were involved, and it is thought they used a pick-up truck to try and remove the ATM, but were not successful in their attempt. Work is ongoing to trace the offenders and vehicles,” said a spokesman for Lincolnshire police.

Crowland resident and South Holland District Council member Angela Harrison, said her son had seen the aftermath of the raid.

“There hasn’t been anything like this here for years. Let’s hope whoever did it is caught very soon,” she said.

The store was due to re-open on Tuesday afternoon and a spokesman for Lincolnshire Co-Op said no members of staff had been present at the time of the raid.

Significant damage was caused to the front of the West Street shop in the incident.

Lincolnshire police are appealing for any information to be given via the 101 number, quoting incident number 36.

Anonymous information may also be given to the independent Crimestoppers number on 0800 555 111.