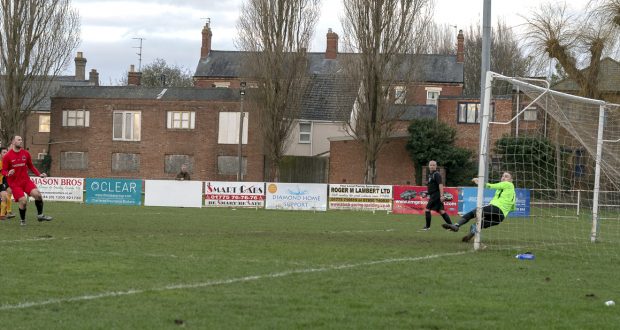 Visitors Deeping made it 11 wins on the spin in the league thanks to Dan Jarvis’ second-half strike at the Sir Halley Stewart Playing Field.

But Pinchbeck, who were second best on the day, should really have rescued a point five minutes from time when Beeson blazed over his spot-kick.

Luke Andersen was sent off for a professional foul on Beeson when conceding the penalty, but the Knights were unable to make their numerical advantage count.

Player/boss Ian Dunn admitted that his fifth-placed side, who were promoted as Division One champions last season, were just shy of the level required to match the title-chasing Clarets.

He said: “Deeping are a very good side. You see why they have done so well this season.

“We knew that they’d look to start well and I was actually quite pleased to keep the score at 0-0 at half-time.

“We huffed and we puffed in the first period, but just didn’t really create enough.

“They upped it in the second half and scored a very good goal, which is what they deserved.

“To be honest, we lacked that killer instinct in attack and didn’t trouble their keeper at all, while Ricky Lovelace in our goal had a lot to do.

“We obviously had that late chance to equalise through Lee, who has been very good from the penalty spot.

“At 1-1 against ten men, who knows if we could have pinched a win at the end.

“But I have to be honest and say that Deeping deserved their win.

“They are perhaps a level above us at the moment, but that’s something we can aspire to put right.”

Most of the action came in the second half at the Sir Halley, with Cameron Johnson cracking the bar and forcing Lovelace into a super save before Jarvis netted the only goal.

He picked out the bottom corner of the net after ex-Holbeach United ace Dan Flack teed him up.

Lovelace also saved from Jarvis, Johnson and Scott Mooney, but Pinchbeck had their moments late on.

Harry Limb wasted a good chance, before Beeson blasted his late penalty over the bar to seal their fate.