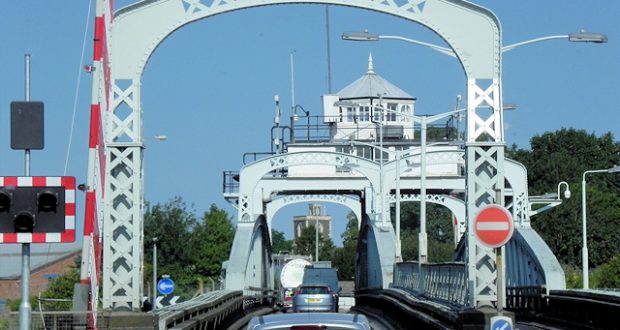 Maintenance work on the historic swing bridge at Sutton Bridge is set to take fourmonths.

The Grade II listed bridge across the River Nene is part of the main A17 between Newark and King’s Lynn.

But drivers are being warned of delays next year when work is carried out on the structure between February and July in a £1.3m refurbishment project.

A report to go before the county councils highways scrutiny committee on Monday outlines the plan.

The bridge was built in 1897 and was designed to carry a railway line and a road and it’s now owned by the county council.

It swings to open the River Nene to larger shipping, which closes the A17, and the council is legally obliged to ensure there is access for navigation on demand as it’s essential for the Port of Wisbech.

The bridge has ‘significant areas of the current paint system which appear to have survived in reasonable condition,’ says the report.

But there is corrosion and failure of the paint system at connection points and inaccessible parts of the bridge.

A specialist survey has been commissioned into the state of the bridge at different locations.

“This will enable us to target full cleaning and repainting at only the most vulnerable locations, whilst just applying a fresh topcoat to all other areas, to add to the remaining lifespan of the paint system currently in place,” the report says.

“It is felt that whilst this approach does not provide a full renewal of the paint system, it offers an appropriate balance between full blast clearing and repainting of the while bridge and good value for money. It is also the most sustainable approach in terms of waste and carbon footprint during the works,” the report adds.

Traffic will be restricted to two-way temporary signal control which will be operated manually to give extended ‘green times’ to clear any backlog of traffic.

Officers at the council had considered a full road closure, diverting traffic via Wisbech, but local businesses preferred the traffic management option, the report to the council says.

“In trials during earlier short duration maintenance operations particularly the resurfacing in September 2019, it appeared to be reasonably successful in mitigating long delays,” says the report.

The footpath access should remain open throughout the works which are intended to be complete before the school summer break.