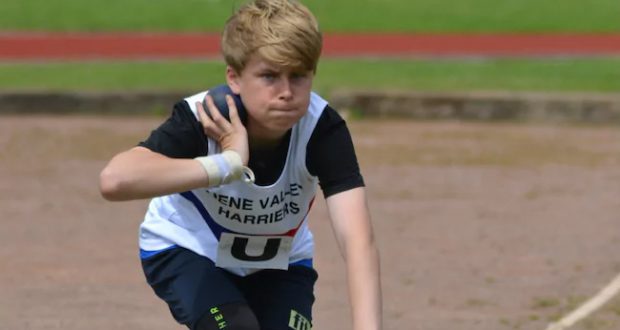 The senior teams were cobbled together, with a number of club coaches making up the numbers in the sprint relays and several youngsters were making their club debuts.

South Holland star Donovan Capes was on stellar form, setting a new record in the under-15 boys shot with a terrific throw of 15.09m.

Capes, who broke Martin Tinkler’s 14-year-old record, now holds the number one spot in the UK as a result.

Capes, the grandson of legendary South Holland thrower Geoff, also threw the discus 35.27m to take top spot, a feat matched by Jack Griffin (32.1m) in the ‘B’ event.

The under-17 boys won virtually everything with Lewis King, Joseph Purbrick, Samuel Staines and Sam Oakley all in good form.

Will Kong clocked 51.5m to win the 400m, while George Harrison enjoyed a 100 per cent record in the shot, hammer and discus.

The men’s senior team were indebted to Simon Achurch and Dave Bush, who scored heavily in the throws.

Tomi Ogunyoye won the long jump with a distance of 6.34m, along with the high jump and B 200m, while Joseph Prince placed first in the 400m.

Throwers Alex Stubley and Hazel Gering performed well for the senior ladies’ section, as did middle distance runner Nicky Morgan – who was first in both the 1,500m and B 400m. Hannah Knight took the 800m honours.

Isla Fullock-Holmes won the under-13 800m in 2.37.9mins and the under-15 girls’ match saw fine performances from Evie Blow, Alexa Boole, Lottie Hemmings and Aoife Glaswell.

There were firsts on the track for under-17s Keira Gilman, Katie Calcutt, Ellie Rainbow and Molly Peel. Peel won the 800m in 2.23.3mins.

Elizabeth Pusey was first in the hammer with a 34.49m throw, while Elizabeth Moorhouse won both the shot and discus.

Under-13s Felix Bowling and Riley Vines won the A and B high jump, while under-15s Theo Briston and Seth Carew did the same in the 300m. Briston won his race in a time of 41.1secs, while Carew clocked 42.6secs.

Nene Valley Harrier Hughes ran a season’s best 21.84secs in his heat before clocking 22.26secs in his semi final.

Three Nene Valley middle distance athletes went out in the heats, with Archie Rainbow running a time of 1.57.93mins in the under-20 800m.

McCrae then finished tenth in the final in a time of 3.55.20mins.