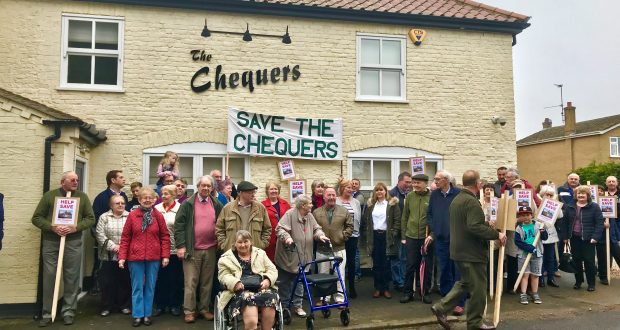 A Save The Chequers demonstration in 2018.

Campaigners say they’re ‘bitterly disappointed’ after planning permission was granted to change an around 200-year-old pub into two homes.

The Chequers in Gedney Dyke, which dates back to around 1793, has been listed as an Asset of Community Value due to the lack of facilities in the village.
But it’s been closed since 2017 with the owner claiming that the pub was no longer financially viable.
Back in 2018 a Save The Chequers group was set up and they got the pub listed as the Asset of Community Value which meant groups could have six months to purchase the property if it was to be sold.
An offer from the community and another from a pub company were turned down though.
Gedney Parish Council backed the application and despite 19 objections from residents, planning officers decided grant the application.
The campaign group’s Charles Walker said: “Many of the villagers in Gedney Dyke are bitterly disappointed.
“This has stood as a pub since the 17th Century.
“We have no idea why the ACV granted in the first place was ignored by SHDC.
“Our parish council recommended this change of use despite the fact many letters of objection, including one from our MP, were sent by local villagers.
“The residents of Gedney Dyke have now lost all confidence in their parish council to act in their interests.
“It is hardly surprising that no-one from our village now wants nothing to do with a parish council that ignores parishioners’ concerns. It is an absolute scandal frankly.
“Trees on the property have already been chopped down so it does not bode well.
“We are at a loss as to what to do next.”
A spokesman from Gedney Parish Council said the authority was looking for more people to get involved from the village.
“The parish council would welcome representation on the council from Gedney Dyke, this is the perfect platform to voice concerns and assist the community,” a response said.
The application was decided by planning officers rather than at a planning meeting.
The report granting change of use permission states: “It is recognised that the facility is the only remaining bar/restaurant within the village and that it has not recently been used as a traditional pub/restaurant. It is also noted that a local pub operator and community group have put in offers, albeit well below a minimum valuation provided by the auctioneer/estate agent.
“Against these factors, the settlement is small with restricted immediate population. The applicant has indicated that it was not well supported by locals.
“It is not within a popular tourist area and is not well served by public transport. Recent financial accounts indicate that the public house was suffering a financial loss and that it was not financially viable. It reflects the general decline in the UK pub sector over recent years. It is considered that these negative factors outweigh other matters in favour of retaining the facility and that it is no longer sustainable/viable.”