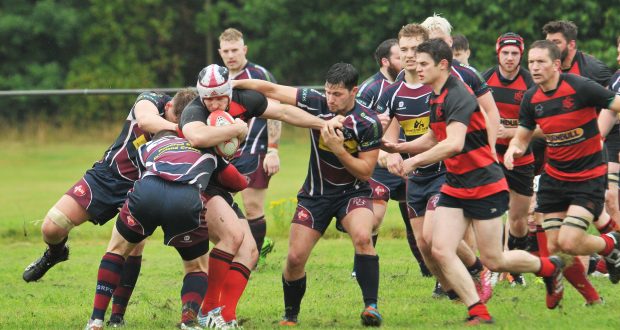 GETTING STUCK IN: Action from Spalding's defeat to Sleaford. Photo: Adrian Smith

Disappointing display after setback in Shield

Spalding produced a disappointing display as they went down 35-10 in their season’s opener at Sleaford in the first round of the NLD Shield Cup competition.
The Memorial Field outfit had been back in pre-season training since June and had produced a good performance in a trial match against Oundle.
In fact the trial match should have been a good preparation with the wet conditions encountered on Saturday.
In the absence of injured captain Harry Brown, Harry Winch led the team onto the field, having returned to the club from Peterborough Lions.
Also returning to the first team was front row Jacob Hutson, who was out nearly all last season with injury.
There was also a welcome return for fly half James West who again was absent for most of last season through injury and commitments with the RAF.
Making their debuts in the first team were Gavin Sharman on the left wing, Harry Waine as blind side flanker and Adam Castle who replaced Sharman in the second half.
The opening quarter of the match was encouraging with Spalding retaining the ball well with most of the possession.
A good pattern of play saw them take the ball into contact with quick support at the ensuing ruck and recycling the ball for the next wave of attack which pulled in Sleaford’s defence before the ball was released to the backs.
However, there were early warning signs as the scrum was struggling to hold their ground against a Sleaford pack which included their second team fly half who had called up at the last minute to play in the front row.
The lineout was under constant pressure with Sam Cowell struggling with his throwing in throughout the afternoon and, with little variation on the jumper, Sleaford were able to disrupt.
Scrum half Will Shield therefore had poor possession to deal with throughout the match.
The first score fell to Sleaford with a penalty, but Spalding hit back nearly immediately with a quick tapped penalty being taken on Sleaford’s five metre line and Winch took a pass at pace to crash over the line.
Lock Kieran Bailey, who was struggling with a shoulder injury, was replaced by Josh Caley who went into the front row with Mikey Watts moving to partner Jordan Templer.
With Sleaford steadily gaining the upper hand, they scored their first try just before half-time for an 8-5 advantage.
With all to play for Spalding should have been able and capable of stepping up and going on to win the game.
However, it was Sleaford who started more brightly with their fly half finding room to bring his runners into play and a second converted try was scored followed by a penalty for an 18-5 lead.
Gaps were appearing in both teams’ defences and both Spalding’s wingers, Gavin Sharman and Tom Winch, started to show their pace and it was Winch who closed the gap with an excellent run and try down the wing.
Ryan Chappell, who had had a good game at open side flanker, was replaced by Sam Cooke and Castle came on for Sharman.
However, Spalding’s team-work was falling apart, discipline was poor, with disrespect being shown to the referee and, if there was a game plan, players were disregarding it.
Sleaford capitalised, scoring two converted tries and a penalty to run out easy winners.
This was a very disappointing display by Spalding but, if you are going to have an off day, then perhaps it was best to get it out of the way before Saturday’s first league match at home to Coalville.
The failure to kick for territory when under pressure was hard to comprehend, so there is plenty to work on in training this week.
However, there were some positives from the game.
Hutson showed he has hopefully overcome last season’s injury by playing a full game while Sharman, with his pace and tackling, must now be challenging for a first team place and Waine never gave up.
Will Shields’ determination and tackling around the breakdown area was exemplary.
Spalding: Mikey Watts, Sam Cowell, Jacob Hutson, Kieran Bailey, Jordan Templer, Harry Waine, Ryan Chappell, Harry Sharman, Will Shields, James West, Gavin Sharman, Harry Winch, Huw Sharman, Tom Winch, George Douglas, Subs: Josh Caley, Adam Castle, Sam Cooke.
2016-09-07
James Bedford