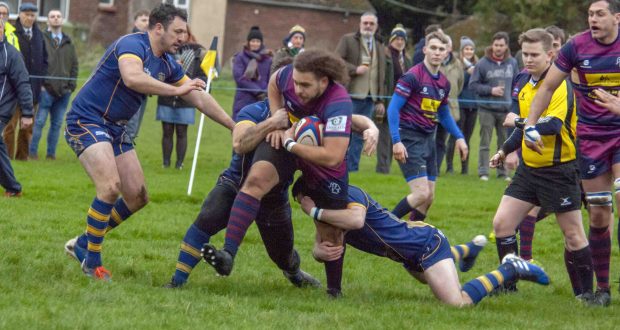 With the two sides at opposite ends of the table, youthful Town were always likely to be underdogs on the day – but they’ve been boosted in recent weeks by former players Jim Williams and Wes Cope joining the coaching staff.

The first opportunity to score fell to the home team after only three minutes, but the penalty kick was missed.

Bourne edged the opening minutes, but as they spread the ball wide along their backs, Lewis Adams intercepted and cut a brilliant line. He went over the try line, but the ball was lost forward with a last ditch intervention from a home defender.

Within a minute Spalding were back on the attack with strong carries by Ash Anker, Kev Hudson and Harry Cole, but desperate defence by Bourne held the ball up and Town’s second opportunity in the opening minutes was missed.

When play settled down, there was a good even contest developing between the forwards at the breakdown. Lineout possession was also fairly even, with Jason Steels and Ash Piccaver looking secure against a well-drilled Bourne.

However, the home centres were starting to look dangerous, with their pace and support play leading to a good break through Town’s defence for the opening unconverted try.

A few minutes later another penalty kick was missed by the hosts.

Spalding reacted positively and, with their forwards encamped within Bourne’s 22, only a stray final pass to Pete Waudby – with the try line beckoning – stopped them pulling level.

It was then Bourne’s turn to ramp up the pressure, first with a successful penalty kick.

That was followed by another penalty, which they elected to kick for touch, only to completely miss the sideline and waste their opportunity.

Within the opening minutes of the second half, left wing James Luto pulled up and was replaced by Fabian Simpson, while another penalty kick from distance was missed by the home side.

Spalding were striving for their opening score, mainly through their forward play, while Bourne were confidently spreading the ball wide and on a couple of occasions last man tackles by full back Conall Mason saved the day.

On at least three occasions Spalding established field position a few metres short of the try line, but the clinical finishing was missing as the hosts defended stoutly.

The only score of a tight second half, again came from Bourne’s threat in the backs as they broke from their own half and, with good support play, left Town’s defence stranded.

With a successful conversion kick, a 15-point lead had been established with 15 minutes left to play.

Undeterred, Spalding came back at Bourne and Harry Cole – supported by his young brother Will – made an impact with their carries.

On the left wing Simpson was showing his pace, while Spalding centres Harry Waine and Gav Sharman were finding some room and again creating field position.

But as the theme was on the day, the final drive for the try line was not successful.

With the last move of the match Town sent a grubber kick through, with the ball rebounding off the corner flag and back infield for Simpson to pick up and touch down.

However, the referee ruled that the ball had touched the line and ruled out the try, much to the surprise of nearby spectators.

As the final whistle sounded, the scoreline reflected Bourne’s clinical execution, while Spalding had at least six genuine scoring opportunities which were not taken on the day.

A big plus from the game was the performance of scrum-half Ben Shields who, having spent a couple of seasons out on the wing, had an excellent match against experienced opposition.

This Saturday sees the final round of league fixtures the year, with tenth-placed Spalding playing host to fellow strugglers Daventry (ninth) at the Memorial Field (2pm).