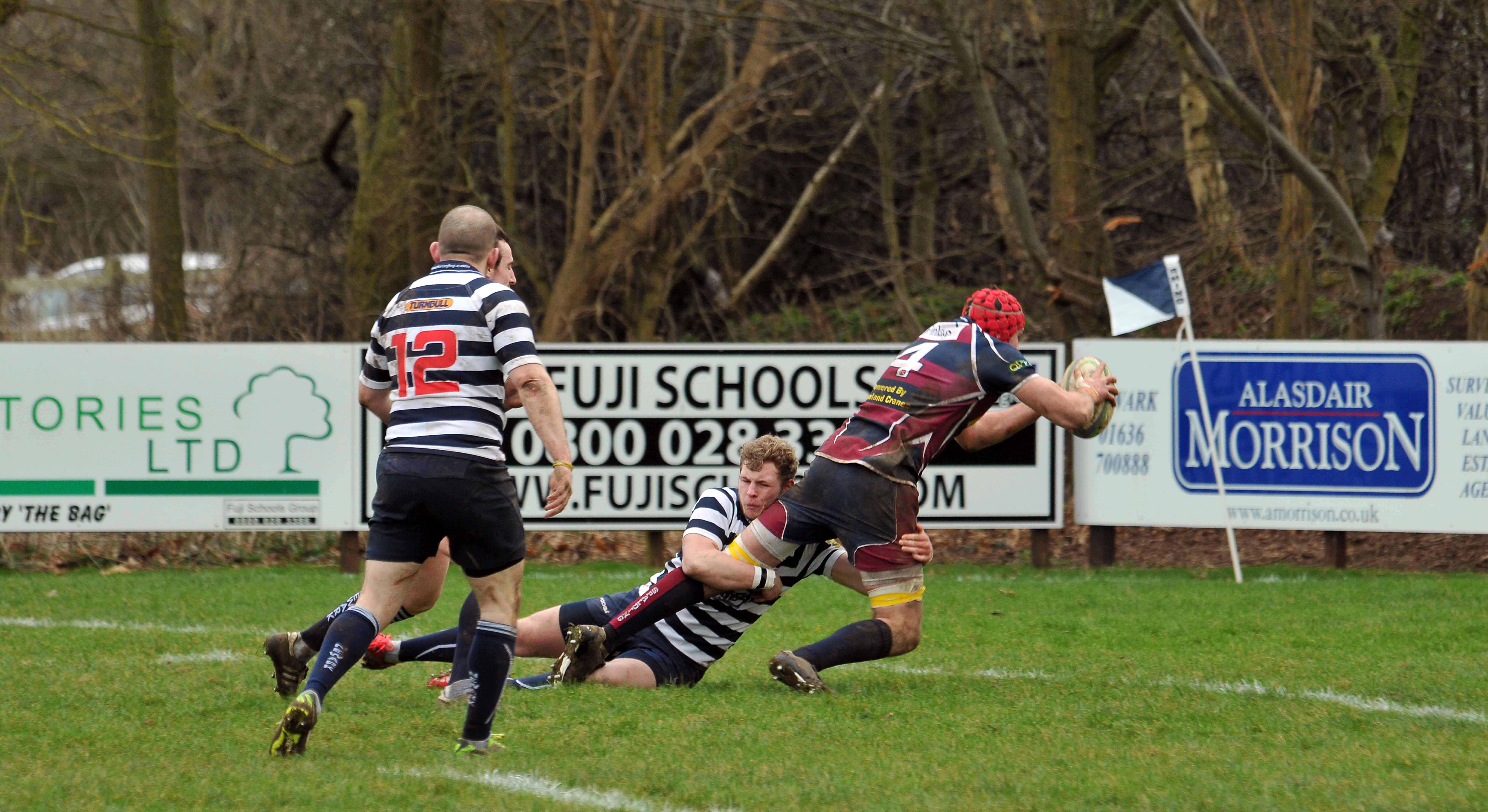 LATE SCORE: Ash Piccaver was on of Spalding RFC’s three try scorers in the loss at Stamford. Photo by ADRIAN SMITH

Spalding RFC are now facing an uphill battle to avoid back-to-back relegations after losing 22-19 at Lincolnshire rivals Stamford on Saturday.

Tries from Chris Douglas, Tim Waltham and Ash Piccaver did at least earn Town a losing bonus point at Hambleton Road – but they now know that their fate is out of their own hands with three Midlands Two East (North) games left to play.

The Elephants are three points clear of relegation rivals Mansfield, who were beaten heavily at West Bridgford. But the Nottinghamshire side have a game in hand – against basement boys Bakewell – on Town and could be ahead of them by 5pm this Saturday.

Should Mansfield defeat Bakewell, Town are certain to kick off their next match in the drop zone for the first time in weeks.

Despite taking a great following to Stamford, Spalding made the worst possible start to the derby.

The hosts kicked off and immediately caught Spalding cold as they gathered the ball in and the home forwards drove towards the try line, broke down the blind side and scored under the posts for a converted try.

Spalding’s sluggish start continued with Stamford on the front foot using either their number eight to gain yardage or bringing their captain, playing inside centre, in on a crash ball.

Town’s Sion Williams was leading the defensive organisation by example with tackle after tackle.

But momentum was being built by Stamford and they were stopped just short of the try line with Ash Anker and Sharman putting in last ditch tackles. At the ensuing ruck Jordan Templer executed what looked like a perfect cleared out move but the referee saw differently and a yellow card was produced.

Again Stamford capitalised, spreading the ball wide to their right wing for an unconverted try.

Spalding’s scrum then started to exert pressure, with the front row of Mikey Watts, Sam Cooke and Keir Moore gaining the upper hand.

And, with scrum-half Will Moore also making a nuisance of himself harrowing his opposite number, the tide seemed to be turning in the visitors’ favour.

Having worked their way downfield onto the five metre line, the ball was spread wide from the ruck. Adam McHugh made ground, but a poor final ball along the backs, went astray and Stamford ran the length of the pitch to score under the posts

What should have been only a one-try advantage at half time had become a three-try lead for the hosts – and Spalding were left with a mountain to climb at 19-0 down.

They responded by sending on Douglas for George Brown, who was struggling with a hamstring strain, a switch that saw Harry Harrison moved to centre.

The Elephants started the second period brightly and, with the lineout working well, McHugh was starting to punch holes in the home defence, with the support play being quicker to the breakdown.

Stamford’s scrum-half was yellow carded and immediately an overlap was created on the left wing for Douglas to walk in his try, with Harrison kicking a good conversion.

Two minutes later Spalding narrowed the gap with the forwards picking and driving for Waltham to go. Harrison again converted.

However, Spalding then made then repeated the same mistake as in the first minute of the game, allowing Stamford to win the ball at the restart.

A driving maul was established and, with Town’s defence failing to stop the advance, Stamford’s lead was stretched to 22-14.

Spalding now had 20 minutes to save the game – and potentially their season.

As the tension mounted the referee was having difficulty managing the game, calling both captains over on a couple of occasions.

Stamford held out until the final minute when Piccaver found space around the blind side of a breakdown to score with Harrison’s conversion attempt just failing – but it wasn’t enough.

Town will now keep a keen eye on Mansfield’s home game against rock-bottom Bakewell on Saturday, ahead of their next outing against Ashbourne at the Memorial Field (April 2, 2.15pm).