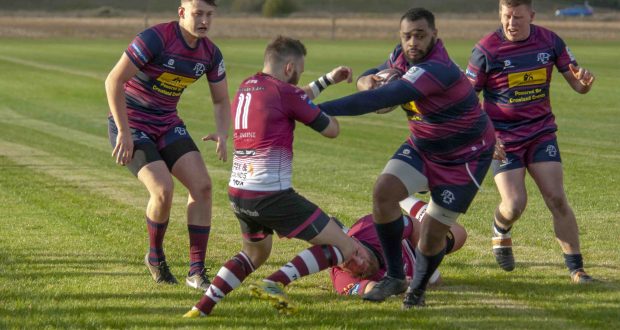 BEATEN: Ash Anker (on the ball) played a part in both Town tries. Photo by ADRIAN SMITH

Depleted Spalding RFC suffer another away defeat as Rushden and Higham

Spalding RFC are still looking for their first away win of the Midlands Three East (South) season after suffering a 48-12 defeat at Rushden and Higham on Saturday.

With plenty of first team regulars missing, Town travelled with a squad topped up by several call-ups from the second side – and they were unable to overcome a side that boasts one of the best home records in the entire division.

From the kick-off Rushden had the early advantage, as The Elephants settled in under the captaincy of George Brown for the third match in a row with Luke Turner still out injured.

Brown started at hooker alongside second team skipper Richard Stevenson and Kev Hudson in the front row, with the latter marking his return after a couple of years’ absence.

After five minutes of play Spalding stunned the home crowd as they worked their way upfield using Ash Anker and Connor Lilburn as ball carriers to establish a position five metres from the try line.

Then, from a ruck, Hudson drove over and with fly-half Conall Mason having a simple conversion, a lead of seven points was being displayed on the score board.

Town were trying to exercise their game plan of keeping the ball in the forwards to establish a platform for scrum-half Ben Shields to zip out a pass to the backs, with George Douglas and Gav Sharman forming a new partnership.

But Rushden could not be subdued for long as their powerful running flanker broke through for the home team’s opening try.

Spalding’s scrum was holding up well and the lineout was also working well, with Lilburn and especially Alan Charevicius securing good balls.

However, Rushden were getting on top and in a devastating spell using a combination of their back row and the backs.

A crushing five tries were run in for the home team to rack up a comfortable 29-7 lead at half time.

The start of the second half saw Spalding controlling the ball through their forwards with Ed Williams and Brown prominent with some big carries.

From a position on the half way line, Anker broke clear, drew a defender and released Shields to run in from 30 metres for their second try of the day.

Rushden, though, nipped any momentum the visitors may have looked to build up in the bud and their response was fairly swift.

Town failed to clear their lines from a defensive lineout and with a kick charged down hopes of turning around the score line evaporated.

The game became fairly open with Spalding competing well, but rarely being able to release their backs or wingers into space.

In contrast, Rushden’s left winger helped himself to two further tries before the final whistle blew with the hosts 48-12 to the good.

Spalding, who slipped to ninth after the defeat, now face the daunting task of visiting table-topping Stockwood Park this Saturday (2pm).