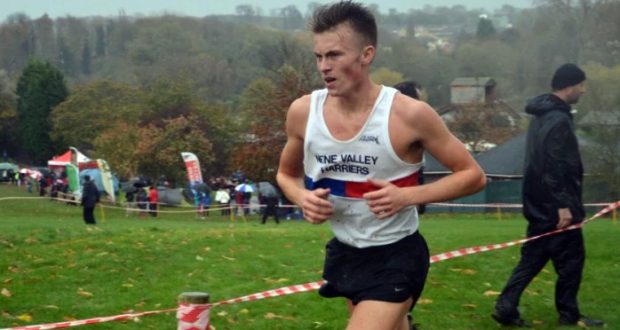 Depleted Harriers get season off to solid start

Nene Valley Harriers came through a tough test to pick up valuable points in the opening match of their 2018 British Athletics League Division Three campaign at Trafford writes BARRY WARNE.

Several key athletes were unavailable for the long trip up north – but those who travelled battled hard for every point as the Harriers finished sixth out of eight teams, laying down a solid foundation for the season ahead.

The track proved a happy hunting ground for several members of a predominantly youthful team – especially Will Hughes, who blew the opposition away in the 200m as he won comfortably in a time of 22.17secs.

Ronan Rawlings was beaten by a tenth of a second over 100m, finishing as runner up with an 11.22secs clocking.

Kempson was only beaten by English cross country champion Adam Hickey, who finished five seconds ahead, and was the only athlete able to offer any sort of a challenge to the highly-rated runner.

Meanwhile, Sean Reidy pulled off a comfortable win over the 400m hurdles, crossing the line in 55.60secs.

Away from the track, Sam Richards won the long jump with a best leap of 6.86m and Martin Tinkler threw 14.59m to take the shot put honours.

Nene Valley Harriers, were among the seven clubs competing at St Ives in the first fixture of The Eastern Masters Athletics League – and claimed the local bragging rights in both the men’s and ladies’ matches.

The Nene Valley men won the fixture, and were particularly strong in the 35 to 49 age group, where Sean Reidy comfortably won the 400m with a 54.90secs clocking. The 37-year-old also won the triple jump.

Julian Smith was an emphatic winner of the 100m, and long distance runner James Mcdonald showed his versatility when winning the one-mile walk in a time of 9.10.12mins.

In the older age groups, Andrew Robson impressed for Nene Valley when finishing second in the over-50 400m, recording a time of 63.90secs.

Nene Valley’s ladies finished as runners-up behind Ryston Runners and scored well in the sprints, with Clare Smith easing to wins in the over-35 100m and 400m, in which she ran a time of 64.70secs. 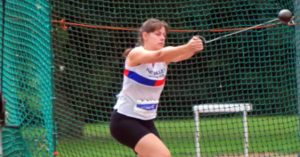 Judith Jacobs came in 2nd in the over-50s 100m, as did Brenda Church in the over-60s race. Jacobs went one better away from the track, winning the triple jump with a distance of 7.57m.

As usual, Andrea Jenkins was unbeatable in the over-35 hammer and shot. Her putt of 43.82m was nearly three times the distance of the runner-up.

The Nene Valley Harriers Eastern Young Athletes League team passed a test of their mettle in the Hertfordshire heat.

They came away from Ware with category wins at both boys and girls under-15 level, and a solid third place overall.

William Kong pulled of a fine treble, winning the under-15 100m and 200m in times 11.5secs and 23.6secs respectively Kong also won the long jump.

The talented Donovan Capes secured his usual victory in the shot, while also backing that up with maximum points in the B discus.

Elsewhere, William West-Robinson clocked 2.32.2mins to take first place in the B 800m.

The under-15 girls also enjoyed plenty of firsts, with Alicija Gawronski pulling off a 200m and 300m double, while Chelsie Bole comfortably won the 1,500m in 5.11.1mins.

Katie Calcutt came first in the high jump and B long jump, while Danielle Pussey threw 31.98m when winning the javelin.

Nene Valley found points harder to come by in the other age groups, but under-17 Matthew Coleman became the second triple winner of the day with firsts in the B 400m, 800m (with a time of 2.15.80mins) and the javelin.

Also on winning form was Amber Park, who took maximum points when clocking 2.25.1mins in the under-17 800m, while Katie Marsh won the under-13 70m hurdles.