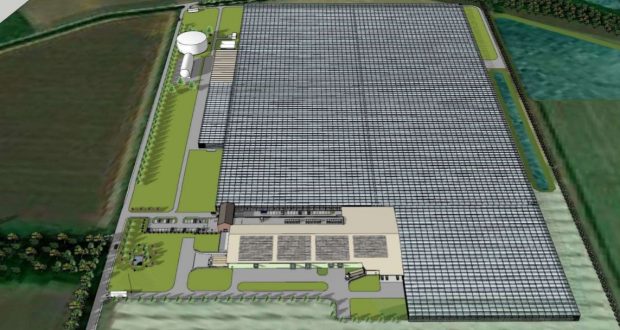 An artist’s impression of the new plant.

Jepco, the local company behind the project, is aiming to expand its production at Gedney Marsh using techniques designed to reduce environmental impacts.
A planning application outlines a three-phase development including ten hectares (24.7 acres) of glasshouses complete with blackout blinds to reduce potential light pollution.
The project, if approved, would provide up to 60 full-time equivalent jobs at the site.
Company CEO Stuart Piccavar said the jobs would be skilled and year-round as the advanced technology and automation would reduce the need for unskilled labour.
“It is the culmination of technologies we have been looking at and had on trial at other plants. One of the things we need to be is carbon-negative and that is entirely possible,” said Mr Piccavar, whose grandfather founded the company in 1946.
Solar panels and three wind turbines will be used to help provide energy to the site, adjacent to the company’s Norfolk House Farm.
“In embracing dry hydroponics, the business is seeking to further evolve its activities to become more efficient and to optimise the resources that can be harvested from the fertile region,” says a document submitted with the application to South Holland District Council.
“The business is now at an important juncture in its development with an opportunity hydroponics presents to positively contribute to addressing challenges,” adds the report.
Crops will be grown in nutrient-filled water which uses five to ten per cent of the amount of traditional agriculture, with up to 200 per cent higher yield per square foot. The system also uses no chemical fertilisers.
Climate change, domestic food security, food miles, rural employment and low-carbon energy are all among the challenges facing the industry.
The proposed site is currently a field which has never been developed.
The glasshouses will have automated control systems, low-energy lighting to extend growing seasons and rainwater will be harvested. The site will also have new roadways, parking and plant rooms.
The new plant will include an integrated preparation, processing, storage and dispatch facility which will minimise the harvest to dispatch time.
Alongside renewable energy, the development will provide any surplus power to the national grid and it can also

be stored on-site with industrial batteries.
With a global challenge of feeding an increasing population, hydroponics offers a good return while using less natural resource, says the report.
Some 70 per cent of water usage goes to agriculture, according to the document which states that by 2050 a further 593 million hectares will need to be used for agriculture worldwide.
Mr Piccavar said he was proud that South Holland was leading the way in food technologies and was working closely with Lincoln University at sites including the Food Enterprise Zone in Holbeach.
He said climate change was already affecting agriculture in this country and South Holland could be leading the way in developing pioneering ways to secure food supplies in the future.
The application is due to be discussed by the planning authority later in the year.