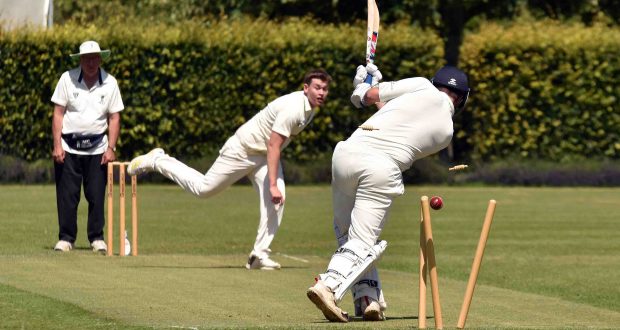 BOWLERS ON TOP: Dan Oldfield is bowled by Will Naylor on Saturday. Photo by JAKE WHITELEY

Spalding Town moved to within seven points of the South Lincs and Border League Premier Division summit with an emphatic derby win over Long Sutton on Saturday.

Hosts Town bowled out their South Holland rivals for 71 in just 28.3 overs as Josh Lawrence took fine figures of 4-15 at Seas End Hall.

And, despite a slight wobble in reply as no less than four players made ducks, a superb 51 not out from Ollie Dring steered Spalding to 73-4 in 22.2 overs for a maximum haul of 20 match points.

After Town skipper Chris Dring won the toss and opted to field, his side started well with the ball.

Peter Cook (21) and Adam Wright (14) attempted to rebuild, but fell just when they looked set to go big, Cook becoming Lawrence’s first victim. Once Atapattu got rid of Wright, the wickets tumbled quickly with Angus Bell (5),

Brandon Andrews (2-9) was the other Town bowler to get in amongst the wickets, while also managing four maidens from seven overs.

Spalding’s reply could have gone either way, with Sutton ripping through their top order. Indeed, had they managed to add the scalp of Ollie Dring, they may have pulled off the near-impossible and defended their low tally.

Skipper Chris Dring, Jay White, Atapattu and William Steed were all out without troubling the scorers as Baker (3-19) and Adam Whitaker (1-24) wreaked havoc.

However, Ollie Dring kept his head and was joined by Ethan Lawerence (10 not out), with the pair seeing Town home with plenty of time and six wickets to spare.

It’s now nine wins on the trot for Spalding, who are bang in the mix for the title in second position.

Sutton, meanwhile, are only 24 points further back in fifth place and are still very much in contention.

Moulton lost Alin Carter (7), Tom Wilson (3) and Matt Barnett (12) fairly cheaply in their reply. But the steady Mike Kearns Snr (12 not out) and Rose (33 not out) soon seized command and guided the boys from Broad Lane to 96-3 in 31.3 overs to claim maximum points.

Harrox’s third win of the season sends them up to ninth in the table.

Down in Division One, Moulton’s second string managed to defend 144 as they edged to an eight-run win over Grantham 3rd at Harrox Playing Field.

Clive Bayston (46), Jamie Juckes (38) and Danny Jackson (22) all scored well as the hosts were bowled out in 44.3 overs, with Sam Durham and Oliver Barry both claiming five-wicket hauls.

Harrox attack well and helped dismiss Grantham for 136 in the 39th over, keeping them fifth in the table.

It wasn’t such a good day for Spalding Town 2nd, however, as the winless basement side lost by 62 runs at rivals Baston.

But Town were only able to make 108-8 in reply, some 57 runs shy of their target despite a watchful 44 not out from opener Nigel Gardner.