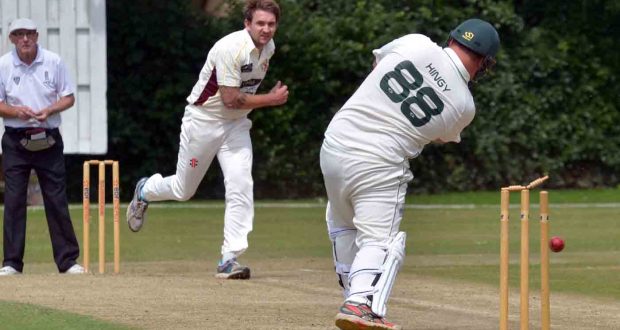 Already-promoted Moulton Harrox missed out on the South Lincs and Border League Division One title after losing their winner-takes-all title shoot-out at Market Deeping 2nd.

Having been put into bat, Harrox made a respectable 175-4 from their 45 overs as Matthew Barnett (53 not out) played a key knock.

But hosts Deeping blew that target away as they raced to 179-2 in just 32 overs as Josh Smith (101 not out) and veteran Dave Gillett (52 not out) shone with the bat.

Harrox made a steady start at Outgang Road, with openers Mike Kearns Snr (43) and Chris Beale (30) both scoring well.

Nick Andrews (2-30) eventually snared both of them, while Smith (1-43) picked up the scalp of Lewis Martin for just four.

Barnett and Simon Juckes (22) steadied the ship and ensured that the score flew past 150, before Richard Witt (1-16) bowled Juckes.

Moulton made a fine start to their bid to defend the total with Hussain (1-40) having Witt caught behind by Kearns for just four.

Juckes (1-22) also had Ross Barnes (15) caught by Lance Bettinson to leave the hosts two down, but they rebuilt in devastating fashion.

Smith and Gillett put the hammer down, scoring at an impressive rate to fire their side to the title with an eight-wicket success.

Moulton can console themselves with second place and promotion back to the Premier Division.

Sutton were bowled out for 183 batting first at Paradise Field as Dan Oldfield (71) and Jake Burton (42) scored well.

Having lost the toss, Sutton were made to bat first in the season finale.

They lost Chris Booth (1) and Angus Bell (0) cheaply, but skipper Dan Oldfield (71) starred with a superb knock that included 15 fours.

Stanway (12) also fell relatively cheaply, but Burton and Adam Whitaler (31) scored soundly in the middle order before the hosts were bowled out in the final over.

Sutton were impressive with the ball, too, with Stanway leading the charge with four wickets.

Sutton finish the season in sixth place as a result.

Above them, Spalding Town slipped down to third after Skegness picked up six points against Boston 2nd.

Batting first, hosts Stamford managed just 144 before being bowled out by Pinchbeck inside 30 overs.

In reply Pinchbeck limped to 108 before being bowled out in the 43rd over.

Coles followed up his super showing with the ball by top scoring with 40, but it was in vain.

Spalding’s reply collapsed to 85 all out, with Mohammad Alam (21) and Ethan Lawrence (16) scoring well.

Despite the defeat, they finish in mid-table.