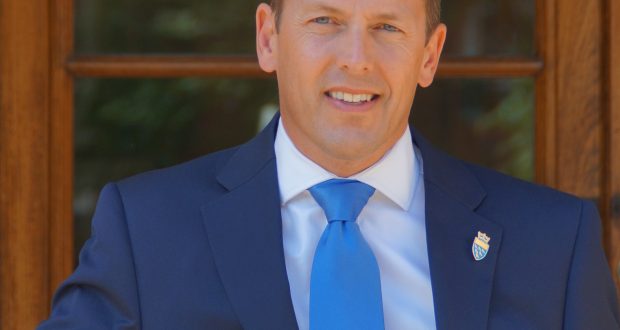 The consultant brought in to oversee South Holland District Council’s separation with Breckland, which officially ended this week, is to be kept on by the authority.

Nathan Elvery (pictured) was officially appointed as the part-time head of paid service for both authorities in October with his contact due to have ended at the end of April.

His appointment was controversial given he’d received a £265,000 pay off after leaving the role of chief executive of West Sussex County Council in November 2019 after a Department of Education report was published stating that the authority had a bullying problem that was ‘modelled from the top of the organisation.’

SHDC and Breckland councils shared the cost of his two days a week consulting work during his initial six month contract over-seeing the break up.

But last week SHDC voted to keep him in the role for the authority, at least until it had signed up to another partnership, and pay him for two days’ work a week.

It was voted through after the meeting was taken behind closed doors to discuss how much extending Mr Elvery’s contract would cost tax payers.

Coun Angela Newton said at the meeting: “It’s not an insignificant amount.

“I’m not suggesting Nathan hasn’t done a good job, but it is a commitment that’s not time limited. We don’t know how long this is going on for.”

The leader of SHDC, Lord Gary Porter told the meeting that it shouldn’t be more than four weeks. He added that although heads of paid services “don’t do a great deal” by law the currently stand alone authority had to legally have someone in the role and it would be better than assigning it to a current employee.

“My preference is keep it outside as that leaves next month clear to be doing what we need to do to get us in a position where we’ve got a new partner in place,” he said.

“The dissolution with Breckland has been brought in on time and in budget with no surprises in there.”

On finding a new partner for SHDC he said: “We’re well ahead of where we thought we’d be at this stage but unfortunately it’s further behind than I’d like it to be.”