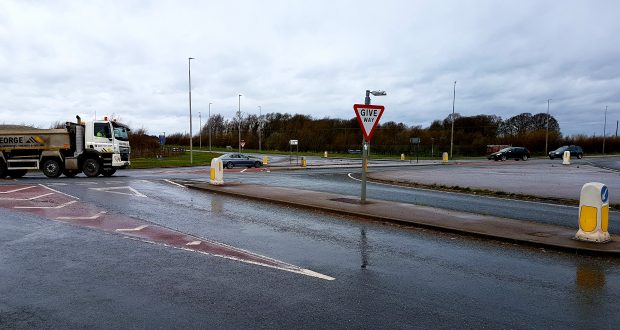 The view of the junction from Hulls Drove.

Coroner to report A16 junction after four fatalities

A junction on the A16 at Crowland is to be reported to the Government and Lincolnshire County Council by a senior coroner as “not a fit and proper configuration”.

The ‘island’ junction – where the B1166 Hulls Drove and James Road meet the trunk road – has been the scene of up to four fatalities since its installation in 2010, an inquest heard on Thursday. It was described as “dangerous, horrendous and confusing”.

Senior coroner for Lincolnshire, Tim Brennand, said: “I ask myself rhetorically: ‘How many more deaths will take place at this location before something is done?’

Using his coronial duties and powers, he will write to Secretary of State for Transport Chris Grayling and the county council urging action to be taken before more lives are lost at the “accident hotspot”.

The inquest at Boston Coroner’s Court on Thursday (Mar7) was into the death of 48-year-old motorcyclist Matthew Bilby, who was killed when he rode into the path of a lorry on September 6 last year.

Mr Bilby, of Jubilee Way, Crowland, was en route to a training course at his workplace – Princes’ factory in Long Sutton – when the collision happened at just before 8am.

Witnesses told the hearing that Mr Bilby rode up the nearside of queuing vehicles in Hulls Drove which were waiting to turn right, either to go across the staggered junction and turn into James Road or to stay on the A16 towards Spalding.

At the front of the queue was a Vauxhall Vivaro van. In a written statement, driver Nathan Howell said the motorcyclist didn’t stop and give way, and the ensuing collision with a DAF tipper truck on the A16 heading towards Peterborough happened right in front of him.

The experienced lorry driver, Andrew Emery, employed by Rose Plant Hire in Peterborough, was distraught as he recalled the moment Mr Bilby pulled out in front of him from the blind side of the van.

“As soon as I saw the front wheel, I hit the brakes,” he said, adding that “time stood still” for a moment.

Mr Bilby was thrown from his bike and was immediately tended to by two passers-by who are nurses.

One of them, Danielle Wilks, said: “I could see that his leg was broken. He said that his chest was hurting. I was just trying to reassure him and keep him as still as possible.”

Asked about his medical history, Mr Bilby said he was diabetic.

Soon he became unresponsive and went into cardiac arrest. The two nurses alternatively gave CPR but he later died at the scene. The medical cause of death was “traumatic injuries”.

Accident investigator PC Sarah Capes said the lorry was doing 47mph, adding: “Looking at dashcam footage, [Mr Emery] took the appropriate action. He did what he could do.”

She and former traffic officer Andrew Parker, now a civilian investigator, both said it would benefit road users for a roundabout to be installed.

The inquest heard that improvements were made to the junction in 2014.

Mr Emery, who knows the road well, said: “It’s the island in the middle which causes the problem. Because of the island, people coming out of the side roads think they can reach the island before you reach them.”

He said that drivers “make a dash”.

Giving a short form conclusion of road traffic accident, Mr Brennand commended the efforts of the passers-by who stopped to assist and gave his sympathy to Mr Emery who, he acknowledged, would live with the image forever more.

Mr Brennand added: “I have an erstwhile hope that action is taken to prevent anything like this happening again. I hope that Matthew’s death will not be in vain.”

Whilst Mr Bilby suffering a medical event linked to his diabetes or that the effect of his in-helmet earpieces had played a part in some way could not be ruled out, there was no evidence to suggest either had.

Mr Brennand, who noted that since he took up his position on November 5 last year there had been 24 serious collisions on Lincolnshire’s roads resulting in 26 fatalities, urged drivers to apply guidance in the Highway Code, particularly to not join a main road before there’s a gap large enough to do so safely.