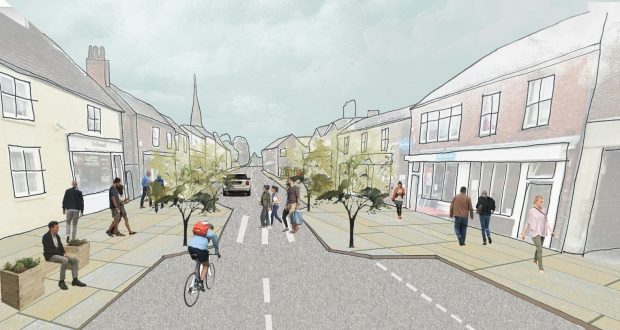 How traffic measures could look on Holbeach High Street.

Holbeach Parish Council is asking local residents for their views on two potential changes to the town centre.

Residents are being asked whether they would prefer the High Street to have restricted access times or traffic calming measures.
It follows parish councillors expressing concerns over early plans for the future of the centre of the town with a bid of £4m having been submitted to the Future High Street Fund.
The council is looking to put forward alternate options and is looking to consult the public on which measures for the High Street it should push for inclusion as part of the plans.
The public can vote on two options. One is a proposal to ban traffic from the High Street between 10am and 3pm, except for buses and delivery vehicles.
The other is for traffic calming measures to be brought in, including lane narrowing, pavement extension and pinch points.
Coun Sophie Hutchinson, said: “The aim of the survey is to understand the public’s opinion on the future of the High Street in terms of traffic management, in order to prioritise spending in the future.
“This could either be used to inform the Future High Street bid if successful or other sources of funding.
“The idea of a consultation came out of a meeting with Nick Worth around the highstreet bid.
“The chair of planning (Eddie McNally), the chair (Graham Rudkin), the vice chair (John Spencer) and then chair of speeding (Michelle Manley) came up with the two options to consult the public on.
“Full council decided that the planning working party should rethink the options as we didn’t believe they were feasible. This is where the two current options were decided upon.
“(District and county councillor) Nick Worth has told us that further consultation will be done if the bid is successful and the options previously put forward can be changed depending on public opinion and feasibility.
“This survey could feed into this consultation if the bid is successful.
“But if we aren’t successful we as a parish council still feel it is important to get a clear public opinion on possible changes to the High Street in order to prioritise spending in the future, as there are and will be other funding sources available.”
The survey can be accessed from the Holbeach Parish Council Facebook page.