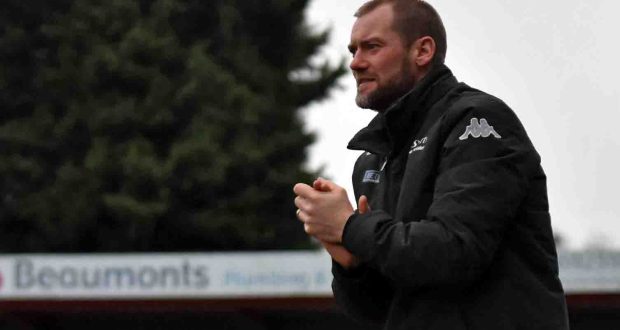 New Spalding United manager Brett Whaley wants his side to be matching the form of the Pitching In NPL Midlands Division big-hitters by the end of the season.

Whaley, who left his role as Wisbech Town boss to take the Tulips’ job just before Christmas, is excited by the challenge that awaits him at the Sir Halley Stewart Playing Field.

The former Yaxley and March Town chief took charge of the 1-1 draw at Histon last Saturday (see page 21) and is looking forward to working at a club he calls “ambitious”.

Promotion was Spalding’s aim at the start of the season, but Whaley admits that it’d take a remarkable run for his new team to break into that battle.

But he is looking to find the kind of consistency that will make the Tulips a major threat next year.

“When the opportunity came to be involved with the project at Spalding it was too good to turn down,” said Whaley.

“I’m still finding my feet a little – Christmas is a busy time to take over.

“The past week or so has been very useful for me with a few training sessions and a game. But what is very clear is that this is an ambitious club.

“The club offers the best possible environment for a manager like me to succeed at this level, from the equipment we use at training to having a budget to work with.

“It’s no secret that this club is aiming for promotion and it’s a different project for me. But, when you strip it all back, it’s just football at the end of the day.

“The past two years at Wisbech have been very useful for me as regards getting used to the demands of step four football in non-league.

“I’ve worked with a tight budget and have been all about getting value for money. I want consistency and competition for places here, which is something I’ll be working on. I’ll be looking to improve the squad and implement my ideas.

“It’ll take something special for us to get into the play-off picture this season, but what I want to see is the team matching the results of the top teams by the end of the season.

“I don’t want to be going into the summer with loads of changes needed. If we can be consistent and finish the season well, it means we’ll have not wasted this year and will be better prepared to go for promotion next time around.

“Whichever way you look at it, I’m excited to get going properly.”

Spalding CEO Leigh Porter pointed to his knowledge of local football as one of the key factors behind appointing Whaley – who will work with Bruno Porfirio and the existing coaching team.

He added: “Brett brings years of experience of local football to the existing management team and that was something we were very keen to add.

“After speaking to a number of people in the last few weeks it was clear Brett shares our ambition, work ethic and goals.”

Whaley’s first home game in charge of the Tulips is against Shepshed Dynamo this Saturday (3pm).

The Leicestershire side were thumped 5-0 at Loughborough Dynamo on Tuesday, but sit just one point and a solitary place behind 13th-placed Spalding in the table.

Whaley felt that result was somewhat “unexpected” and is expecting them to want to bounce back against his side.

He said: “Shepshed play a similar style of football to us and had been on a good run before that loss.

“Their confidence will be knocked a bit and we need to capitalise.”

Scott Floyd returns to the Tulips’ squad for that one, but Chris Ward remains suspended and Josh Hinds has returned to Hull City after his loan spell at the Sir Halley.