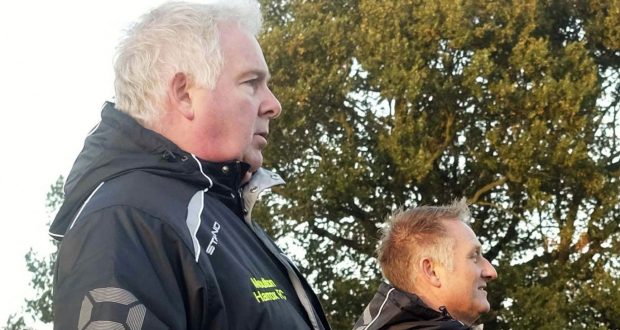 LOOK WHOSE BACK: Paul Crowson (left). Photo by KEN SMITH

Moulton Harrox have finalised their management team for the 2022/23 season – and a familiar name is back in the fold.

Club legend Paul Crowson, one of the most succssful figures in Harrox’s history, has agreed to return as part of manager Kev Nottingham’s coaching team.

He will be joined by another Moulton legend in the shape of Lee Hudson, with current player Ian Bradbury and Simon Black completing the backroom staff.

Nottingham is preparing for a second stint in the role, after joint-bosses Bobby Patterson and Tim Cole resigned at the end of last season.

They had guided Moulton to fifth place in the ChromaSport PDFL Premier DIvision and the final of the Lincs FA Junior Cup.