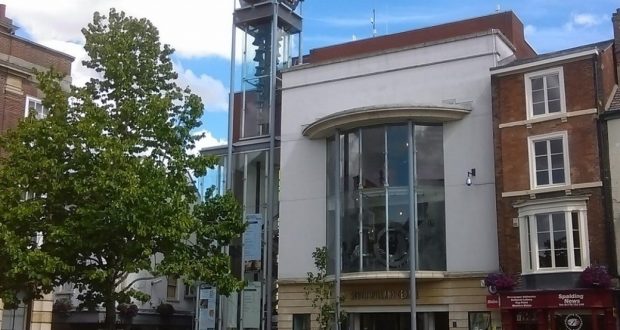 ‘Shoddy’ workmanship means the South Holland Centre will never be profitable, a councillor has claimed but others disagree and it was unanimously agreed it should still be supported.

Coun Jack Tyrrell said it was a ‘bad building’ at a meeting to discuss the findings of a task group set up to examine the future of the Spalding arts venue.

He’s the first councillor to speak out about the building after The Voice’s former reporter Tom Cassidy revealed in 2018 the £2.5m revamp in the 1990s was subject to a legal battle amid claims over cost-cutting.

“I know this is a lot of money but I do think we’ll still spend money on this on a regular basis to keep this maintained because it was shoddily built and we’re trying to patch up a bad building,” he said. “I know because I’ve been through that building and done a lot of work (on repairs).”

He told the meeting the centre had been “built on old foundations”.

“I can’t ever see this ever making a profit at all and it shouldn’t in my eyes,” he continued. “It should be used for charity things and other events.”

In 2003, the now defunct Hallamshire Construction PLC, the project managers of the revamp, took South Holland District Council to court over a contract dispute.

In the documents of the High Court ruling, there is repeated reference to the council instructing the quantity survey to amend agreed orders to cut back on cost.

At the time The Voice asked if £250,000 of work carried out in 2018 was as a result of previous alleged cost cutting but did not receive a response from South Holland District Council.

Just months after that work was completed the district council said it would investigate cracks in the venue’s wall which it said wasn’t related to the previous works.

This week the council outlined the works its carried out.

A spokesman said: “In recent years works at the South Holland Centre have included ongoing redevelopment and essential maintenance, including to the glazed wall curtain, the roof, the clock tower, and fixings, as well as investment in the lighting deck, substantial redecoration and improvements to the function room lighting, and updates to the Centre’s emergency lighting.

“Work has also taken place on the low level roof at the front of the building, plus improvements to manage COVID related risks, including to the ventilation system.

“There is also a programme of future planned works, including further maintenance to the roof and the renewal of the Centre’s boilers.”

The meeting heard others did feel it could be profitable with the task force putting forward 27 recommendations summarised as improve commercial opportunities and initiatives; marketing and promotion; governance, enhance the building and usable space, create an action plan and make ‘operational improvements’ which includes looking at getting films closer to their release dates and setting up a group of volunteers.

Colin Ward of Live Promotions was one of those on the task force and Coun Rob Gibson asked if he thought it could be profitable.

“The short answer is yes,” Coun Bryan Alcock said. “He’s a total supporter and is willing an anxious to try and ensure the centre is successful so his expertise, as we understand it is available if we request it.

“I think the present model can be successful, but that other models can be perhaps.”
The possibility of either a business or community group taking over the building was brought up but

Coun Alcock said that was not something the task force looked into because SHDC was committed to running the centre.

Cutting staff numbers at the South Holland Centre from 13 to five saved £200,000 of the around half a million annual operating cost, but the council will still need to subsidise the building.

But there was also concern the cuts had happened before the task group looked at its running.

Particularly after calls were made at last week’s meeting for the centre to be open more during the day an potentially house a Tourist Information type offering.

Coun Angela Newton said: “I think some of the pruning is a bit too close to the bone and the building can’t be used properly if nobody can get into it to book things.”

Coun Tracey Carter also told the meeting: “I’m worried we’re sending a slightly mixed message at the moment. A few months ago we had a £200,000 reduction with regards to the staff but in the report its saying we want a member of staff manning it during the day.

“We’re wanting it to be an excellent service but then we’ve removed an awful lot of stuff as well.

“This is a really good facility and service we’re offering to our residents.

“I agree it has to be efficient, the marketing is terrible and needs to improve, but we can’t just look at the numbers on this, it’s such an important place.”

Summing up the findings of the task force Coun Simon Walsh said: “We established the centre was totally individualised, inefficiently run, there was a lack of vision of whether it should be commercial, the balance of the arts and whether it could be done.

“It was accepted by the group that it’s an asset for the community and there will need to be a necessary level of subsidy.

“It’s about trying to make the building as effective and efficient as possible to ensure that subsidy is best value for money to our tax payers. It’s getting a fine balance and not making a purely commercial centre.

“There was clearly a lack of governance , leadership and monitoring.

“Nobody really understood how to get the best out of it, so we’re hoping the recommendations we will end up with a coherent, monitored plan that will lead to the future success of the centre.”

Coun Bryan Alcock, who chaired the meeting said: “It needs sharper focus to be polite.”

There was though praise for the centre’s new manager Joanne Mackel.

Phil Perry, assistant director of leisure and culture told the meeting she was already overseeing the implementation of recommendations.

“She comes highly recommended and has a background in London at large scale theatres,” he said. “She’s someone who gives us a good vision going forward.

“The centre when it reopened was very different to what it was pre-covid.

“The staff has been reduced from 13 to five and going forward that’s making a big, big difference.

“The industry as a whole is recovering.

“The public has started to come back and we’re seeing more audience through the door.”

‘Residents must use important asset’

“This is a very important asset to South Holland, regardless of how we look at it,” Coun Paul Redgate said.

“This has been about looking at what we want to do with it as an authority, but we also need people to use it.

“Yes, we can put the greatest films and shows on, but we need people to come and watch them, be entertained and leave happy.

“We can make it the shiniest building in the world but it doesn’t mean people are going to go.

“If we do this, keep this running and find a level of subsidy that works for everyone, the residents need to come and use it.

“If they don’t we’ll be back in a few years time going, what do we do next?”

‘We have to be realistic’ over price increases

One of the recommendations for the South Holland Centre is to look at increasing prices.

“I don’t support the prices being put up,” Coun Tracey Carter told last week’s meeting: “With all the changes we can do it without having to put prices up.

“Lets get on our game before putting prices up.”

However chair Bryan Alcock, responded: “I think everyone would aspire to that, but we have to be realistic. If we look at electricity and gas costs I think it’s going to make it even more difficult to avoid increases in most areas.

“It’s a wonderful aspiration and I hope we can do it, but I have serious doubts.

“It is competitively priced in comparison with other cinema outlets.”

“They have to come up with ways and means of increasing footfall. With a reasonably modest increase on attendance you can have a dramatic effect on the bottom line.”