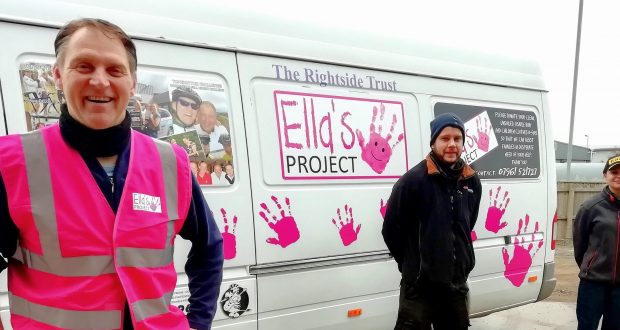 The team at Enterprise Tyres has been supporting the charity.

A South Holland charity has not stopped working during the pandemic, but it faces a tough future if things don’t change.

Ella’s Project usually collects and distributes children’s clothes, aged 0 to five, to families in need.
But COVID-19 put an end to the regular role of the charity and its supporters.

Thanks to the support of two local companies and members of the county council, the project has been able to continue throughout.

But founder Mark Le Sage said without that support the charity would have been forced to close.

“It has been very tough financially as our role changed in lockdown and we were out more than usual but were unable to put on our fundraising events,” said Mark.

“If it wasn’t for the support of the local county councillors and the teams at Enterprise Tyres and Alan Burnett Motor Engineers we would have had to close,” he added.

Items of personal protection equipment (PPE) were delivered to NHS and keyworkers by the charity after they had been donated.

Everything from face visors for schools and hand cream for the fire service.

A delivery of cloth was turned into scrubs by the charity’s sewing team at the height of the outbreak last April.

The charity’s van covered almost five times the number of miles from April last year to April this year than it would usually.

With trips to collect cloth, deliver scrubs and other PPE to a variety of locations including local residential homes, it was put to good use.

Mark said it was only due to the kindness of the two companies that the van was still on the road.

“I pay for the diesel, but there are still costs involved and both companies have been brilliant,” he said.

“We are hoping to get back to normal after June 21 in line with the government guidelines. We just can’t do anything at the moment really and we haven’t been able to do any fundraising events at all,” added Mark, who is a specialist theatre nurse at The Deepings Medical Practice.

The first event which will raise money for Ella’s Project is likely to be at Halloween, restrictions permitting.

“It is going to be a struggle financially and we really need to raise money.”