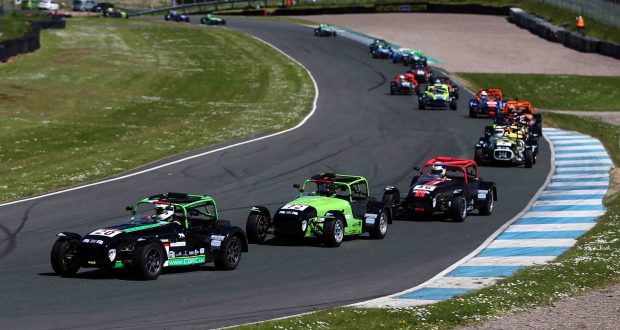 CLOSE AT THE FRONT: Molsom at Knockhill. Photo by SCOTT MITCHELL (www.scottmitchellphotography.co.uk)

Rounds five, six and seven all took place at the Scottish track, with bright and dry conditions making for a fine weekend of racing.

As Molsom hadn’t raced at the circuit before, testing on Friday was all about learning the track.

Molsom made good progress throughout the day and delivered consistent quick lap times.

Qualifying on the Saturday went well and he qualified third for all three races behind rivals Glenn Burtenshaw and Max Haynes.

The two races on the Saturday began with an early afternoon race for Molsom.

It was a steady opener for the South Holland ace, who gained a place early on and moved behind Haynes, who got an early lead.

However, Burtenshaw’s knowledge of Knockhill gave him the lead by mid race, which left Haynes and Molsom in second and third place respectively.

The late afternoon race was cooler and saw Molsom take second place into the first corner.

Positions swapped around again by the end of the lap, and from there it was a three-way battle for the lead.

Towards the end of the race, Molsom was ahead of Haynes for second place until the last lap when lapped cars caused an incident and Haynes slipped past.

That meant Burtenshaw took the win, leaving Molsom with another third place finish.

“The second race was great,” said Molsom. “The three of us were battling for the lead constantly, with some good clean hard racing.

“A lot of positives to be taken forward for the rest of the season.”

Sunday’s race saw Molsom struggle for the first few laps with new brakes, dropping to fourth and under pressure from behind.

Once he adjusted, Molsom re-took third place, and was slowly gaining on Haynes in second.

In the end he took another third place at the flag, which goes down as a good result.

Molsom added: “The brakes in the final race were very keen and using the same pressure I had been using all weekend meant locking the wheels.

“Unfortunately, it took a couple of laps to really get used to them.

“It was my first trip to Knockhill, which meant I had a lot to learn very quickly, so to come away with three podiums is a great result.

“The car yet again behaved perfectly, thanks to 7 Works Automotive, Pete Godfrey and Ryan Scarratt who go racing for fun and offer great support.”

As a result of his impressive efforts at Knockhill, Molsom retains second place in the Championship going into the next round at Snetterton, in Norfolk, on July.