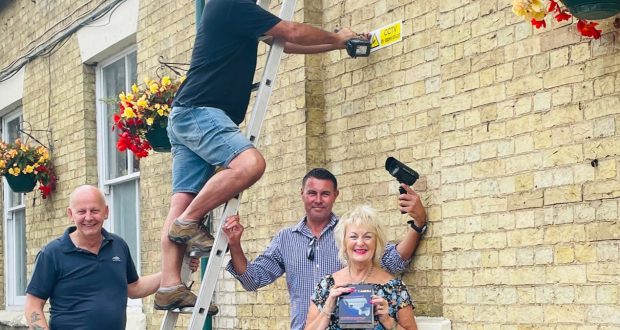 Camera action amid concern over benches

A CCTV deterrent has been put up outside Spalding railway station amid claims thieves have tried to steal benches installed for the Queen’s jubilee.

One of the benches in particular has been damaged and loosened from its footings, just weeks after they were installed.

The new benches were installed by Coun Jack Tyrrell and Ivan Thompson with Jan Whitbourn organising.

But on the weekend of July 23 and 24 an attempt was made to pull them out.

The installations held firm, and despite some now fixed damage, remain in place.

The councillors however felt they needed to protect them with the cameras.

“I was gutted to hear someone had tried to steal them,” said Jan. “It was such a big job to get them installed and for Jack and Ivan to carry out the work.

“They look beautiful and really improve the area, providing a place for people to sit while waiting for a taxi.

“Jack always answers the call for help and he was straight away back to help.”

The CCTV is being funded from Coun Harry Drury’s ward budget.

Coun Jack Tyrrell said: “It was a pleasure to be able to do the benches and they really do make an impression on you as you go past.

“It took about a morning to install but I was happy to go back and help secure them more.”