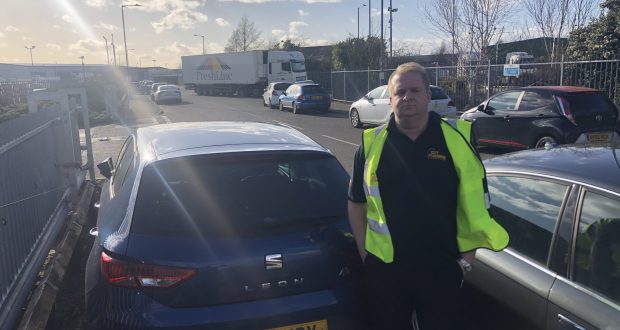 Tim Tomizzi pictured alongside some of the parking on Belvoir Close.

Long standing calls for car parking restrictions on Wardentree Lane industrial site in Pinchbeck have been renewed after construction work on the facility set to include Starbucks began.

Back in 2017 Tim Tomizzi, the manager of City Plumbing Supplies, complained to South Holland and the Deepings MP Sir John Hayes about the parking in and around Wardentree Park, where the business he works for is based, due to cars being parked on both sides of the roads regularly also used by lorries.

No action has taken place since and Tim says the situation has become worse after work began on the creation of the Starbucks, gym and other retail units being built on the corner of Wardentree Lane and Wardentree Park.

Tim said: “The whole situation is an accident waiting to happen.

“People have been told they can’t park where they work so they have to park on the road, often on both sides of it.

“It often means anyone driving has to be on the wrong side of the road.

“It’s only getting worse with all the construction vehicles on the new site.

“We’d like to see two-hour only parking restrictions on the roads.

“But no-one seems to be taking on responsibility for sorting it out.”

“However, the current situation does not pose a significant safety risk and implementing parking restrictions would likely have an adverse impact on businesses in the area.

“We will continue monitoring the area through routine inspections and will reassess if the situation worsens.

“In the meantime, if deliveries are obstructed by parked vehicles due to blocked access, please ring the police’s non-emergency phone number 101.”