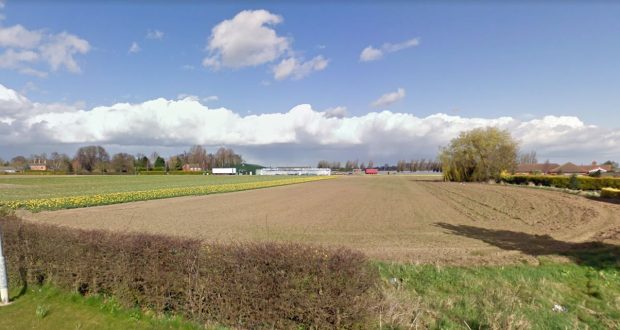 The site as seen from its proposed entry off Sunnydale Close.

Councillors have called for better government standards for housing while passing a new Surfleet estate and claiming more homes being built in South Holland will eventually lead to better provisions in the area.

There were 21 public objections as well as ones from Surfleet Parish Council and Sir John Hayes MP with reasons including over-development and concerns over the access.

Coun Rodney Grocock said the route from Sunnydale Close was “going to be a little naughty getting out of there”, but Highways had not raised any objections.

Councillors passed the application as the development was on land already allocated for housing and met current planning rules and standards as outlined by central government.

Coun Roger Gambba-Jones told the meeting that despite campaigns such as Build Beautiful, the government was “missing getting the basics right” including allowing “the smallest rooms in Europe”.

He lamented that the Surfleet development didn’t provide room for properties to expand and there was “no suggestion” of attempts to make the development carbon neutral.

“Something is wrong,” he said of current planning policy. “I hope something changes.”

Coun Chris Brewis agreed, saying: “We build leaky houses to a poor standard in this country, probably the poorest in the developed world. We need actual serious government action to make sure we have higher standards.

“Even if the standards include carbon neutral technology and put £10,000 on the price of a house, it might not have a heating bill which would make it more attractive for people to live in.

“We don’t think it through at all. I hope one day, though I won’t hold my breath, that we get some suggestions we start to build houses fit for the 21st century, which at the moment, we do not.”

Referencing that SHDC’s Planning Committee refused an application for 75 homes on a larger site, part of which was listed as open countryside, planning chair Coun James Avery said: “It’s always difficult when there’s a level of local objection to housing developments, but this is an allocated site in the South and East Lincolnshire Local Plan and this is within the settlement boundary.

“It’s worth noting that this committee has made the right decision in the past in refusing what was a wholly inappropriate potential development on this site.

“We do have to make defendable decisions with our heads over hearts. This application is more favorable compared to the previous one.

“I’m mindful that if we don’t have additional housing in our villages then that has an impact on schools, local services and local shops.

“Houses built appropriately in the right numbers in the right locations that can only benefit some of our towns and villages as we move forward.”

“Despite most of the objections we get, the fact of the matter is development is followed by the improvement in the provision of services,” Coun Gambba-Jones added. “That’s the reality.

“We can’t force the system to do it the other way round.

Councillors also heard that Ashley King (Developments) Ltd would meet planning guidance by having 12 affordable homes on the site and contribute £31,680 towards the NHS and £154,358 for education after initially arguing it should pay less.

Coun James Avery continued. “I’m very pleased that, though the developer is not entirely happy with it, they’re going to accept it which means there’s a good level of contribution for Surfleet and the district.”

Coun Brewis said he hoped it would be a lesson to developers trying to lessen their Section 106 costs.

“I’m over the moon we’ve challenged the alleged viability study. If you’ve paid too much for the site that’s your fault. You shouldn’t expect the public purse to pick up all your obligations.”