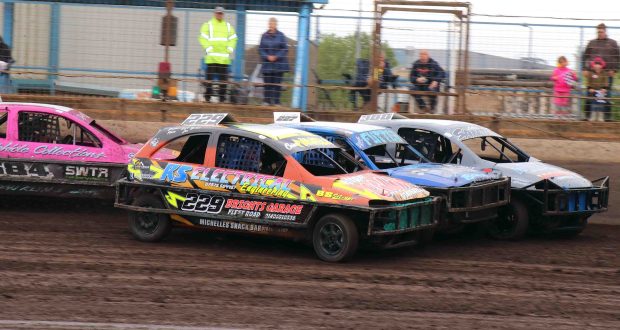 ONE TO WATCH: Caine Parnell (229) had a very successful night in his 1300 Stock Car. Photo by ANT JENKINS

There was plenty of success for local racers on a night of non-stop Stock Cars action at the Adrian Flux Arena in King’s Lynn on Saturday.

The action came thick and fast, with some excellent racing on display.

It had been bone dry all night and then, crucially, rained for the all important finals, sadly affecting the feature F2 Stock Car People’s Trophy final race.

Nevertheless, the drivers did a great job in the conditions, with South Holland racers on particularly impressive form.

In the F2 Stock Cars, Barry Clow (597) impressed once again, following a number of race wins in previous outings. This time he had to settle for a super second place last Saturday.

Brothers Jack (103) and Pat Issit (113) were also on track, with the Spalding siblings having a good night between them.

Jack picked up a second place in the Consolation event, with Pat fairing slightly better with three top ten finishes across the night – including a fourth place in the big money feature final.

Charley Tomblin (129) was one of the main men on the dirt shale surface and took home a ninth place in his preliminary heat.

He followed that up by a taking a fantastic third place in the final, showing wet weather racing experience beyond his years.

Dan Booth (612) also impressed and took home a sixth place for his efforts in the consolation.

The big and brutal 2L Saloon Stock Cars were next on the billing – and lived up to the lively expectations.

Spalding’s Wes Starmer (525) put a borrowed car through its paces to a sixth and third place in the opening heat races, before another sixth place in his main race of the night.

Simon raced to a third place finish, before being sent for a rough ride around the fence, going around most of the bend on his side. Rowan also secured a top ten place.

The 1300 Stock Cars rounded off the line-up and delivered another savage night of bumper action.

Caine Parnell (229) enjoyed a very successful night for his efforts, with three second place finishes in his races.

South Holland talent Parnell is looking like being one to watch this year.

Coming up next at the King’s Lynn venue is more Stock Car and Banger action with a Saturday and Sunday special on July 2 and 3.