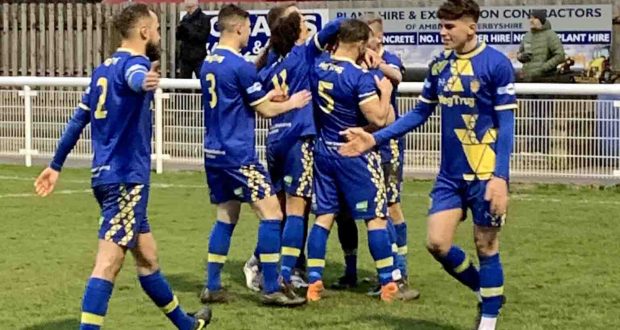 GET IN! Spalding celebrate one of their goals. Photo courtesy of @SpaldingUnited on Twitter.

Talismanic skipper Brownhill opened the scoring with a cracking header (31) and added to his tally four minutes into the second half with another sizzling finish to put the Tulips ahead again after Phil Watt had cancelled out his opening goal in the 39th minute.

Substitute Alex Peterson levelled the scores for the hosts five minutes from full time – but within a minute Brownhill was on the charge again, only to be denied his hat-trick by goalkeeper Ryan Musselwhite in full flight with a fingertip save.

On any other day the Tulips would have been highly satisfied to have won a share of the points against their fourth placed hosts.

But a distinct feeling of disappointment followed the referee’s final whistle on this occasion.Apart from the quality of the two goals, the opening half of the game was somewhat mundane with few highlights, particularly in the key areas.

The Tulips’ opening goal did bring the contest alive. A brisk right side break and neat interchanges between Jamie Jackson and Scott Floyd ended with the latter whipping over a cross.

Brownilll rose above the defence to make firm head contact and despatch the ball past keeper Musselwhite.

Belper came storming back, with Derry Robson firing inches wide from six yards. But, just minutes later, they were back on level terms with Watt slamming the ball past Alex Smith from the edge of a packed area following a corner.

The second half was a high octane affair with the Tulips the more dominant of the two sides, particularly after Brownhill had restored their lead in the 49th minute.

This time he found the net with a stinging right foot strike at the far post following some neat footwork by young Gianluca Bucci and solid assistance from Kegan Everington.

Joel Brownhill, returning from injury, replaced Jack Smith in the 54th minute and quickly settled into the game by adding pressure on the home defence.

It was at this point that the Tulips were enjoying their best period of the game, but they were unable to stretch their advantage.

When Belper stepped up the pace, keeper Alex Smith denied them with a crucial save at full stretch at the expense of a corner.

But the Tulips failed to clear the following kick and were punished by Peterson, who lashed the ball in from 18 yards to level the scores with just five minutes remaining.

The draw leaves Spalding ninth in the table, seven points off the promised land of the play-offs.