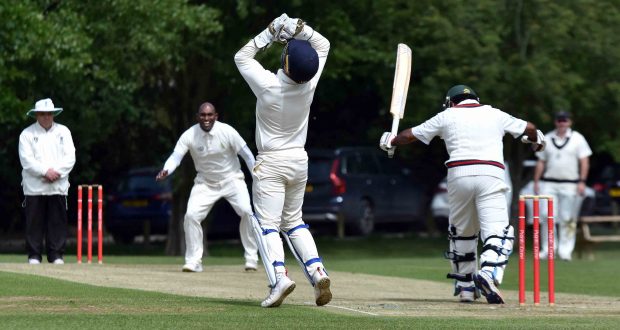 CHIPPING AWAY: Action from Spalding Town's attempts to bowl out Bracebridge Heath. Photo by JAKE WHITELEY

Spalding Town endured a tough day on Saturday as hosts Bracebridge Heath handed them an 118-run defeat in the Lincs ECB Premier League.

A dominant display with the bat paved the way for Bracebridge’s first win of the season, as Taylor Fell’s unbeaten 125 steered them to a huge 305-2 after winning the toss.

Jon Manton (38) and Mitch Freeman (38) put on 72 for the first wicket as Town racked up a season’s best 187 in reply, but it’s now four defeats from five games for Chris Dring’s promoted side.

Spalding actually got the best possible start with the ball as Nilantha Atapattu (1-37) had opener Sam Mason LBW for a three-ball duck to leave the hosts 0-1.

But a 142-run stand for the second wicket followed, with Fell and Vikram Atri (7) batting superbly. Atri scored ten fours and a six before finally falling to Manton (1-30).

Fell, who made 13 fours in his 145-ball knock, was then joined by Alex Willerton, who added an unbeaten 84 from just 69 balls.

Town’s reply was ticking along nicely before Freeman was removed by Alex Moor (1-26), then Manton fell to Joseph Mansford (3-42) to leave them 96-2.

Josh Lawrence chipped in with 22 at number three, but something of a collapse followed as they fell from 108-3 to 136-8.

Brandon Andrews offered resistance at the end with an unbeaten 33, but Town were all out for 187 in the final over.

Next up for Town is a home game with Skegness on Saturday (11.30am).