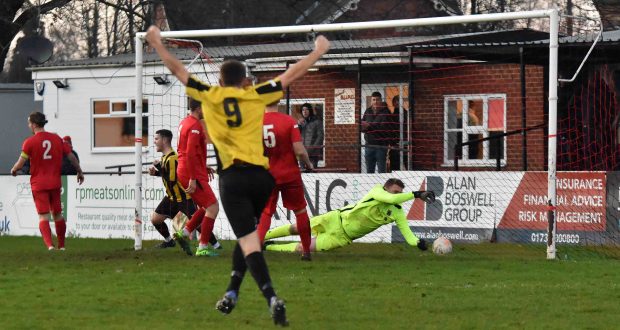 The spoils were shared as South Holland rivals Pinchbeck United and Holbeach United played out a 1-1 draw on Monday.

Both battling to stave off relegation in the Uhlsport UCL Premier Division North, the draw didn’t really suit either side at the Sir Halley Stewart Playing Field.

The first half was goalless, but Pinchbeck carried the greater threat and went close to getting the perfect start when new loan signing Marcel Chipamaunga volleyed an acrobatic effort off target on five minutes.

William Hollingsworth then had a goal ruled out for offside for the hosts, before Baughan wasted the Tigers’ best chance when he fired straight at Alex Smith when through on goal.

Two minutes into the second period it was Holbeach who went ahead when Dougill picked out Luke Chester, whose cross was deflected into his own net by Pinchbeck skipper Dan Worthington.

The lead didn’t last long, however, with Archie Moyses curling home a superb free-kick to level for the Knights.

Looking to get the winner, the hosts threw on the returning Enoch Opayinka, who looked a threat in attack.

It was the striker who collided with Tigers’ keeper Blake late one, forcing the stopper off. With Holbeach having already made three subs, they had to put defender Warrington in goal for the final ten minutes.

Pinchbeck were unable to capitalise, though, leaving the spoils to be shared.

The draw is just a third this season for Danny Clifton’s Tigers, who remain bottom and ten points from safety.

The new chief felt that it was very much ‘as you were’ for his side after the derby duel.

Clifton said: “I don’t think we’ve really gained or lost anything by drawing.

“We didn’t get much luck on the day – losing two players in the warm-up and ending the game with a defender in goal is far from ideal, really!

“We went there with a gameplan to have three up front and get on the front foot from the off. But, if I’m honest, it didn’t work and that’s on me as manager.

“We changed things up at half time and playing with a bit more width really helped.

“It was encouraging to get something from the game, especially with so many players making debuts.

“If we’d had lost the game we’d perhaps be looking at certain relegation, but we’re still in the mix.”

For Knights chief Lewis Thorogood, his side remain two points clear of the drop zone but have played three games more than 17th-placed Selston.

He said: “All things considered, a draw was probably about right.

“Perhaps if I dwelt on it for a while, I’d say we had the better chances, had two goals disallowed and conceded a freak goal.

“Had Marcel’s early chance gone in, I think it would have been a totally different game.

“But I have to give credit to Holbeach, they’ve brought in a lot of new players and they certainly looked much-improved.

“I’ve not seen them work that hard in a while, so credit where it’s due.

“From our point of view, after falling behind we responded well and looked pretty dominant from that point on.

“If anybody was going to get a winner it would have been us, but we couldn’t get the job done.

“Overall, we’ve still got the same gap to Holbeach and Selston, so it’s not the worst point in the world.”