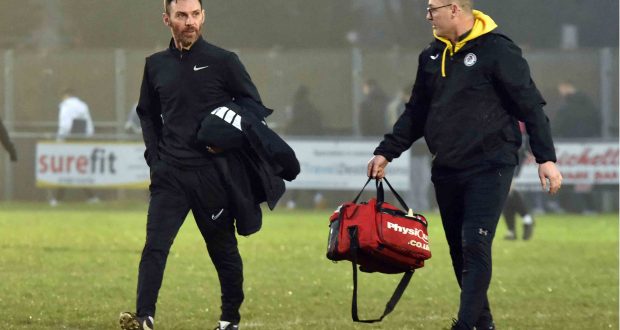 Having only taken two matches as Tigers chief, Clifton is beginning to put his own mark on the squad after handing out debuts to youngsters James Blake, George Warrington, Sam Harris and Lewis Baughan in the 1-1 draw at Pinchbeck United on Monday.

He’s also swooped for left-sided youngster Zac Chaudhari this week, with the former Yaxley talent expected to be in the squad for Saturday’s Uhlsport UCL Premier Division North clash with Sleaford Town at Carter’s Park (3pm).

But Clifton admits that he hasn’t even met a number of players currently on Holbeach’s books and that he’s tried – and so far failed – to convince a number of more experienced players to join the club.

And, with Holbeach going into the Sleaford game adrift at the bottom of the table, he knows that experience is key in their bid for survival.

“It’s looking like building the kind of team I want here is going to be a long process,” admitted Clifton. “On the one hand, I’m very pleased with some of the younger players that we’ve managed to bring in over the past week or two.

“That’s great for the long-term future of the club, but what I’m finding harder is enticing the more experienced lads to come here.

“I’ve spoken to players that have past associations with the club and haven’t been able to get them back. Some have dropped out of the game, others are elsewhere – hopefully the answer may be different if we can show some improvement on the pitch.

“It’s difficult to put into words, but as long as we’ve got a chance of staying up it’s important that we try to add experience and give it our best shot.

“If we were certain to be relegated, we could perhaps spend the season blooding the younger players and having a look at everybody.

“It’s hard, some of the lads here haven’t even replied to a message I sent when I took over. It’d be nice to have everyone together at training, but that’s been hard given we’ve just had Christmas.

“I’ll never tell a player I don’t want them. Everybody has a chance to be involved here, what they want to do moving forward is up to them.”