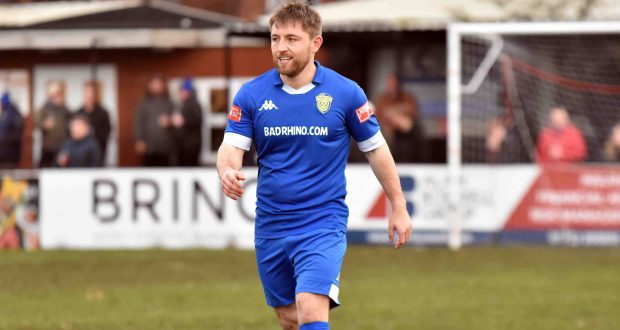 ON THE MARK: Ben Seymour-Shove scored in the win at Holbeach on Tuesday. Photo by JAKE WHITELEY

Brett Whaley feels that his Spalding United squad need to change their ways if they are to rise above their current position in mid-table.

The Tulips chief suffered his first defeat since taking over the role at Cambridge City on Saturday (see page 28) and has noticed a couple of recurring issues.

Whaley is looking for his side to show better control in games, but is also wanting them to show more of a ruthless streak in front of goal.

His preference is to do that with the current squad he has at his disposal, but admits he could dip into the transfer market if the opportunity presents itself.

He’s hoping to see an improvement at Daventry Town on Saturday (3pm), who currently sit 17th and just above the drop zone in the Pitching In NPL Midlands Division.

“I want to see some sort of improvement on Saturday,” said Whaley, whose side are 13th. “We need to learn to do better.

“Controlling games is something I want to see us do, but we’ve also got to take those chances when we create them.

“I’m not overly concerned, as we do have players within the group that have goals in them.

“Naturally, when a new manager comes in, it takes a while for the players to learn what is expected of them. I understand that will take time for them.

“We’ve had a good chat about that and I do know that we have good players here. But they also know that we’re at an ambitious club.

“At this stage of the season and being 13th, it’s a hard sell to get players to come here.

“If the right ones become available we’ll make a few changes, but I want to improve with the players we have here now.”

Saturday’s opponents Daventry are on a three-game winless streak, while they drew the reverse fixture at the Sir Halley Stewart Playing Field 1-1.

Whaley hopes to welcome back Scott Floyd and Liam Adams to the fold after they featured in Tuesday night’s friendly game at Holbeach United.

The Tulips are also hopeful of sealing a permanent deal for Luca Bucci, who has been on loan from Gainsborough Trinity.