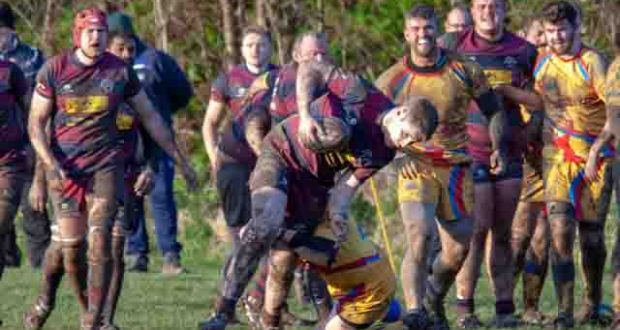 PHYSICAL BATTLE: Spalding RFC and Buxton battle it out at the Memorial Field. Photo by ADRIAN SMITH

Impressive Spalding RFC marched into the final of the National RFU Vase Cup (Midlands section) with a 10-0 triumph over Buxton on Saturday.

Buxton, old adversaries from when Town played in Midlands Three East (North)last season, arrived at the Memorial Field in second place in their league – having been the pace setters earlier in the season.

But the Elephants produced a strong display and two tries from Ed Booth set up a final date with Midlands Three East (South) rivals Dunstablians.

Spalding were boosted by the return of Ash Piccaver, at lock, having been injured since the first game of the season.

Captain Dan Adams was able to select a very settled team, meaning confidence was riding high ahead of kick off.

However Spalding had never progressed further than this stage in a national cup competition – having lost to Wheatley Hills RFC (Doncaster) in the semis some time ago.

The game started with both teams playing conservatively, keeping the ball in the forwards and trying to retain possession, while both defences were closing down space, cutting out any ambitions to play open running rugby.

There were a few encouraging signs for Spalding as Buxton were penalised several times, allowing fly-half Willis Ingleby to kick for touch and gain some territory.

With Piccaver jumping at the front and Ash Anker to the rear, good possession was being won for scrum-half Ben Shields to use. However, Buxton’s lineout was equally as effective.

Similarly both scrums seemed to be fairly equally matched. And, with centres Adams and George Brown relishing the physical tackles, the visitors’ ambitions to spread the ball out wide to their dangerous wingers was being limited.

But, when put to the test left winger Matty Holmes put in a crunching tackle on his opposite number and full-back Conall Mason was effectively sweeping up.

Spalding were relatively in control, with the back row of Harry Sharman, Ryan Chappell and Harry Cole being a constant threat with their forceful carries – but Buxton were holding firm and by half time neither team had scored.

However, everything changed within a few minutes of the restart. Town were pressing deep into Buxton’s territory, with their defence closing down space.

Sharman and Anker made good carries and, with Shields passing out to Ingleby, he put in a chip kick out wide and right winger Booth swept in to open the scoring.

The Elephants’ scrum then began to gain the upper hand, with the front row of Jacob Greaves, John Barrett and Luke Turner, giving everything.

Buxton’s scrum was in retreat and a turnover was conceded. But, to Buxton’s credit, they came back at Spalding and had a good spell for 15 minutes.

What was noticeable, however, was how well the home team were communicating and helping each other to plug any gaps.

They effectively shut Buxton out and the away side never threatened the home try line.

Buxton did miss a penalty kick and Spalding’s Mason saw a similar effort kept out by the crossbar and post as the score remained 5-0.

Having weathered any comeback efforts, Town were then back pressing deep in the visitor half.

Ingleby was again instrumental in opening up their defence with his run and pass over the top finding Booth out wide – and he ran in to score his second and open up a significant lead of ten points.

Next, Chappell – a couple of metres from the try line – was stopped only by the strength of a double tackle by Buxton defenders.

Booth was also denied his hat-trick by a knock-on.

By now, Spalding’s front row were completely exhausted from their efforts and Miguel Da Silva was on with fresh legs, replacing Cole.

Finally, referee, Nic Bisset, who had had an excellent afternoon, blew his whistle and the Spalding players and supporters celebrated.

Town hooker John Barrett felt the game was “really competitive game but Town always felt in control”, while captain Dan Adams declared himself “over the moon” with the team effort. Ash Anker added that he was “delighted” with his man-of-the-match performance.

Spalding are back in league action on Saturday when they visit second-placed Oakham (2.15pm).