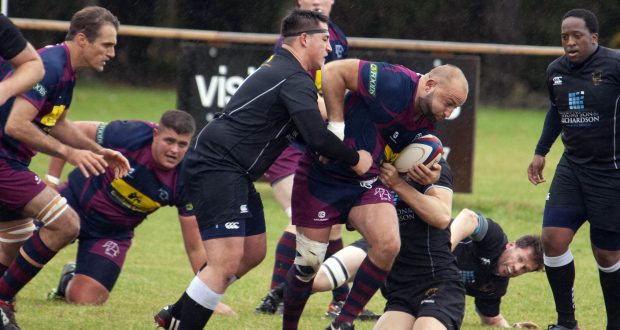 HARD-HITTING: Harry Sharman was on the receiving end of a nasty tackle on Saturday. Photo by ADRIAN SMITH

Four bonus points softened the blow of another away defeat for Spalding RFC in Midlands Three East on Saturday.

Town suffered a narrow 29-26 loss at Nottingham Moderns, having had to play 55 minutes with 14 men following a red card to Jordan Templer.

However, a spirited comeback from the Elephants saw them score four tries and finish close enough to Moderns – ensuring they bagged a double dose of bonus points.

That keeps Spalding in fourth place in the table, some 12 points off second place with five games to play.

With a quarter of an hour played, Spalding were staring into the abyss having already conceded three tries as Notts Moderns racked up 19 points with no reply.

Kicking off with a slope and wind advantage, the hosts started confidently while Spalding were distinctly off the pace – being slow to close down space in defence, looking pedestrian to the breakdown and offering a distinct lack of support runners when in possession.

Featuring back in the team after long lay-offs were George Brown at inside centre, Jason Steels (blindside flanker) and Ben Williamson on the subs bench, with Matt

Heaton starting at hooker for the first time in the absence of John Barrett.

Moderns opened their scoring when their backs passed along the line, creating an opening on the right wing to score in the corner.

Next, from their own half, the home team fashioned a break through the middle, offloading in the tackle and enabling them to score under the posts.

Worse was to follow as, within 60 seconds, shambolic tackling by Spalding let Moderns back in under the posts and a substantial lead had been established.

While the conversion was being taken, Spalding gathered around captain Dan Adams for a hard-hitting team talk.

The response was immediate, with Harry Cole and Ash Anker producing some big carries that led to a spirited response.

Harry Sharman began the set-up a ruck, but Moderns’ counter rucking was brutal and illegal, followed by punches aimed at Templer – who retaliated.

Unfortunately the referee only took action against Templar and showed him a red card, meaning that Spalding – for the second week running – would be down to 14 players for the remaining 55 minutes.

Town’s best form of defence was attack and they started to take the game to Moderns with both centres Adams and George Brown making hard yards, while scrum-half

Ben Shields was starting to provide excellent service to fly-half Willis Ingleby from the breakdown.

Then, a highly dangerous and deliberate ‘coat hanger’ tackle to Sharman’s neck and head only drew a yellow card for the home tackler.

Spalding were now spreading the ball wide and a breakdown infringement by Moderns saw them take a quick tap penalty.

Jason Steels sliced through the defensive line to score, with Conall Mason converting just before the half time whistle.

Spalding’s belief went up a further notch within five minutes of the restart with the home side deep in defence.

Anker twisted and turned to break a couple of tackles and reached out to touch down. With a successful conversion, Moderns’ lead had narrowed to five points.

Next, Ingleby made a superb break down the middle – evading several tackles – and then released Gav Sharman on the left wing to round his opposite number to touch down and miraculously the game was all square at 19 points each.

However, loose passing minutes later between half back Shields and Ingleby saw Moderns snatch back a seven-point lead which was extended by a further three points with a penalty against Spalding for a ruck infringement.

All of the subs made an impact as Town had Moderns pinned back deep in their half looking for that vital break.

Williamson was stopped just short, Sharman was held up, Steels made inroads and Cole was stopped by a no arms tackle to his shoulder and head, which should have been a red card punishment, but only a yellow shown.

Finally, with two minutes on the clock remaining, Spalding stretched Moderns’ defence on their five-metre line. Mason drew the last man and released Gav Sharman to score his second try of the afternoon.

With a successful conversion from out wide, Town had clawed their way back to come away with two bonus points for scoring four tries and being within seven points of their opponents.

Again, this was a case of Spalding’s team spirit shining through in adversity, coming away with some rewards for their second-half display while keeping them in fourth in the league.

Town are back at home this Saturday when sixth-placed Rolls Royce visit the Memorial Field (2.15pm).