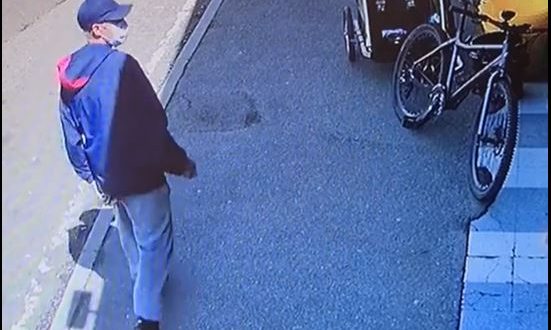 A thief took just a minute to steal a bike and child-carrier when the owner was in a Spalding shop.

Jamie Elston had been called back into Scooby Doos, on Swan Street, to collect an item.

It was a matter of seconds and the bike thief struck, taking Jamie’s only form of transport for him and this three-year-old daughter.

“The trailer was found in the River Welland, but I really need my bike back. It’s the only transport I have,” said Jamie, of Weston Hills.

“I literally popped in the collect something at the counter and was literally about to ride home.

“I look after my nan and also have a baby boy due in November and the bike is all we have,” he added.

The thief arrived on a pink bike, also believed to be stolen, which he left at the shop.

Jamie’s Carerra bike has a raft of distinguishing features and is very recognisable. Every bolt on it is red and it has a set of red handlebars fitted.

The thief was spotted on the shop’s CCTV system and police alerted.

Shop owner Dan Rowland said Jamie was a regular shopper and would be lost without his bike.

“He only has the bike and I really hope it turns up. I posted on Facebook and it has been shared 3,000 times, someone must know,” he said.