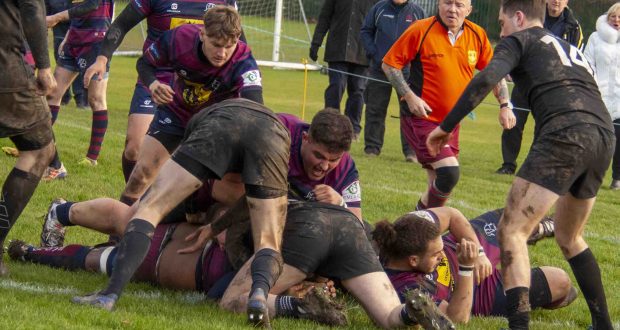 TOP PERFORMANCE: Spalding RFC score a try against Daventry in their fine 24-0 victory on Saturday. Photo by ADRIAN SMITH

Resurgent Spalding RFC made it back-to-back wins in Midlands Three East (South) with a convincing 24-0 victory over Daventry on Saturday.

Town’s fourth win of the season came with an added bonus point and pulls them five points clear of the bottom two, albeit having played a game more.

The showdown was a contest between two of the division’s bottom four sides, with the Elephants knowing that a win would put them above their visitors.

Spalding welcomed back captain Luke Turner in the front row after injury, while Sam Noble was back at lock.

With a settled back line in place, Town were looking to do a job on Daventry, who the previous week had suffered a thumping away at league leaders Stockwood Park.

From the kick-off Spalding had their visitors under pressure, with Pete Waudby and Miguel Da Silva driving possession forward and lock Noble finishing off the forward’s move by going over the line with the opening try inside two minutes.

This was the start that Town needed – and, from the restart, Daventry’s kick failed to reach the ten metre line and the hosts had a scrum on the half way line.

They immediately had the opposition pack going backwards, with scrum-half Adam Sutcliffle’s fine pass finding Conall Mason, whose grubber kick saw Gav Sharman race through, pick up and touch down behind the posts for Mason to convert.

Now 12 points up and playing excellent rugby, Spalding were in dreamland.

To their credit, Daventry dug in and started to disrupt the home team’s composure with some determined defence around the fringes halting Town’s back row of Will Cole, Ben Shields and Harry Cole.

However, once the ball was out to the backs Taylor Crowson was again showing his pace and ability to look for space and perhaps should have done better with a pass out to right wing Callum Lewis, judged to be forward by the referee.

But the forwards were having joy with their carries and Daventry were unable to stop Ash Anker going over to give the Elephants a 17-0 lead after just a quarter of the match.

Having contributed to Spalding’s dominance in the scrum, there was then a blow for captain Turner as he went down with a recurrence of his knee injury and was helped off the pitch replaced by Macauley Crane, with Noble moving to prop.

Spalding had further opportunities in the remaining ten minutes of the first half, with full-back George Douglas coming into the line at speed. This time it was Sharman who was denied a scoring opportunity with another forward pass.

The second half was a case of Daventry frustrating not only Town but also the referee. Indeed, an away winger was shown a yellow card, followed shortly afterwards by Spalding’s Harry Cole.

Daventry were putting Spalding on the back foot and now it was their stout defending keeping the visitors at bay.

With every relieving kick to touch by fly-half Mason, the visitors had two good lineout jumpers who won possession and helped them search for a way back into the game.

However, they were becoming more and more frustrated as they were unable to break down Spalding’s defence.

Centre Gareth Williamson came to the fore with his highly effective tackling and fellow centre Taylor was also high in the tackle count.

As the game moved towards a close, a red card was shown to Daventry’s scrum-half with ten minutes left to play.

With a one-man advantage Spalding were back on the front foot and Anker duly claimed his second try with an unstoppable carry, earning his side their try bonus. Mason converted to round off an impressive win.

This Saturday sees Town make the trip to Melton Mowbray (2.15pm), who sit in sixth place in the standings.