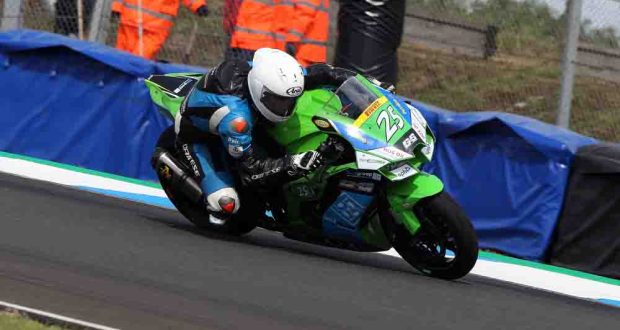 SOLID SHOWING: Jorel Boerboom was G&S Racing's only reason to be happy at Knockhill. Photo by DAVE YEOMANS

Neither of the Wyberton team’s Junior Superstock riders raced, but the weekend was salvaged somewhat with a strong performance by Jorel Boerboom in the Pirelli Superstock Championship.

It was unfortunate that Kevin Keyes was unable to attend the meeting because of financial restraints, which left New Zealand rider Zak Fuller to represent the team in the Junior Superstock class, where he hoped to enjoy two races instead of the usual one.

Fuller rode well in wet conditions on Friday in free practice and, considering he had never in his life raced on wet tarmac, he recorded some good lap times.

Indeed, he was looking forward to Saturday’s qualifying when the rain had dispersed and a dry track awaited him.

Unfortunately, as Fuller went out onto the track for qualifying he caught a kerb and fell from his machine, dislocating a finger in the process.

Because the class was oversubscribed and he lacked a qualifying time, Fuller was not permitted to race so missed out on valuable track time and points.

Despite the fact that he had not ridden the big bike at the short Knockhill circuit before, he rode well to qualify in 26th position.

Boerboom then brought the bike home safely at the end of the two races, recording a brace of 20th places in the process.

G&S team manager Tom Fisher said: “Well, what a difficult and challenging weekend that was for us.

“I think it was the worst weekend we have ever had to endure, rescued only by the efforts of Jorel Boerboom who rode the wheels off the bike in his two races.

“Kevin Keyes was unable to be with us this weekend so we were one down before we even turned a wheel.

“Zak Fuller was finding it difficult in the wet conditions but managed to record some positive times in free practice, but then messed up as he went out for qualifying in the dry and crashed.

“So, with no qualifying time and being fourth reserve if anyone dropped out, he was unable to race.

“This weekend has been a huge expense for the team with fuel so expensive and a 1000-mile round trip so a bit of a nightmare. We will put it behind us and reconvene at the next round.”

The above-mentioned next round is at Brands Hatch over the weekend of July 22/24.