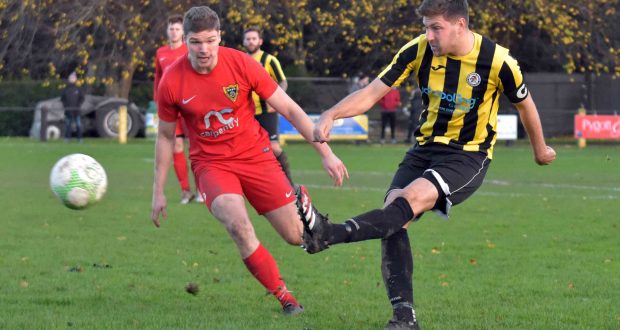 Phil Barnes reckons that Saturday’s home defeat to Harborough Town may be the last fixture at Carter’s Park in 2020.

A first-half goal from Dan Forbes (43) handed the Tigers their first ChromaSport UCL Premier Division defeat since September 9 in what was a rain-hit fixture.

But all the talk afterwards was the impending lockdown that is forcing non-elite football to be suspended for 28 days.

Barnes isn’t overly optimistic that football at grass roots level will return immediately after the English lockdown ends – and believes bringing the game back at the earliest opportunity shouldn’t be a priority.

“We all love football and that’s why we’re involved at this level,” said Barnes. “But we have to have some perspective, it’s not very important in the grand scheme of things.

“Do I think we’ll be back in early December? Not really. I don’t think we’ll see non-elite football back before Christmas if I’m being honest.

“I hope I’m wrong, but I’d be surprised. You’d imagine there are bigger issues to deal with before we’re back functioning as normal again.”

On the game, Barnes felt that his side – who had been on a six-game unbeaten run – perhaps deserved a draw.

But he credited Harborough on their first-half performance and admitted they were the better side at times.

“It wasn’t the best game,” added the Tigers chief. “The weather was dreadful and the ball spent a lot of time in the air for that reason.

“Harborough were the better side in the first half and got their goal.

“We were on the front foot in the second half though and looked much improved.

“I think we could have got a draw, but it wasn’t to be.

“It’s never nice to see an unbeaten run come to an end, but what you want to do is go out and win the next one.

“Unfortunately, it looks like it’ll be quite a while until we get to play in the league again.”

There was one big positive for Holbeach on an otherwise disappointing day, with striker Jonny Lockie making his return from a nasty ankle injury as a second-half substitute.

He was hoping to feature in the UCL KO Cup final against Rothwell Corinthians on Wednesday night (7.30pm).