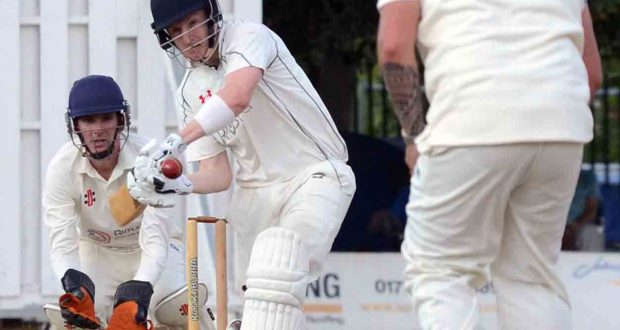 ONLY MAXIMUM: Jonathan Miles clubbed a six in his 30. Photo by JAKE WHITELEY

All-rounder Miles, who played a key role in steering Town to first place last time around, has replaced top order batsman Josh Newton as skipper for the 2019 campaign.

Saturday’s clash with Graves Park at Spalding Grammar School will see the reigning Premier Division and Division One champions go head-to-head in what is the pick of the weekend fixtures.

Champions in the top tier last season, Spalding had hoped to be back in the Lincs ECB Premier Division this campaign, but their ground failed its grading.

Spalding Grammar School were also unable to offer their pitch for use at Premier Division level this time around, so Miles is focused on doing the business on the pitch once again as the club bid to get their ground up to the required standard.

In his third season at the club, Miles says that he wants to be a “pro-active” captain and is looking forward to the new challenge, despite the obvious disappointment of being denied promotion.

He said: “I’m looking forward to it, being captain of the club is a big honour. Obviously, it’s disappointing that we’re not going to be in the top flight.

“We all wanted to play cricket at that standard, but it wasn’t to be this year.

“The club knows what we need to do to improve the ground and we’ll endeavour we have that in order by the end of the season.

“My aim is for us to repeat the trick and aim to emulate last season’s success – but it won’t be easy.

“You never know what other teams have done to improve. Thankfully we’ve not lost any players from last year, but we will be giving some of the younger lads their chance to impress.

“A lot of our youngsters are now aged between 15 and 18, so they’re ready to test themselves in the first team.

“A couple of the older players, the likes of Roy Tilley and Julian Wilson, may not be as involved. So, there will be a few changes.

“I think we’ve got a good side, but we know it’ll be difficult to repeat what we achieved last year.

“I plan to be a positive and pro-active captain, so hopefully we’ll play some good cricket.”

The clash is Graves Park’s second of the season already, having lost by 76 runs against Long Sutton 1st last Saturday.

Sutton were bowled out for 173 at Paradise Field, with Barry Stanway (36) and Raj Sangha (19) top scoring.