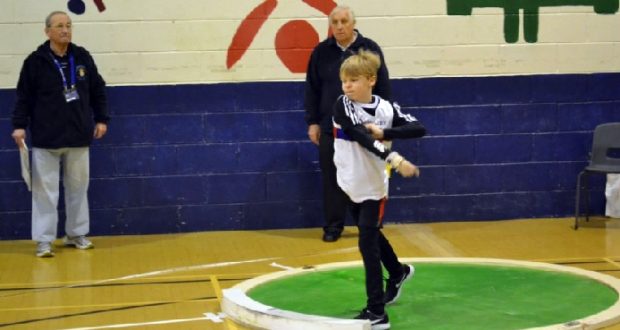 Capes, who is the grandson of South Holland and Great Britain shot putt legend Geoff Capes, has created athletics history by becoming the first ten-year-old shot putter to ever throw over ten metres.

He achieved the incredible feat with a whopping winning throw of 10.55m when competing in the London Inter Club Challenge meeting at Allianz Park in Hendon last Sunday.

Lawson is the younger brother of Donovan Capes, who began the year at the top of the UK under-15 shot putt rankings.

Donovan recently smashed the under-15 Lincolnshire shot putt record by over a metre at the Lincolnshire Track and Field Championships.

The Bourne Academy student set a new mark of 14.42m, which was a phenomenal performance seeing as he’d only been training for three weeks after suffering a badly broken finger in January, which meant he had to miss the whole of the indoor season.

Younger brother Lawson was in double record-breaking mode at the championships, too.

He beat his own Lincolnshire under-11 records from last year in both the long jump, where he set a new personal best of 3.72m, and in the 80m sprint, where he clocked 11.8secs.

Hunt was two places ahead of Peterborough AC’s Josh White, whose time of 1.57.41mins was also a lifetime best.

James McCrae, formerly of Nene Valley but now representing Sheffield club Hallamshire Harriers, ran a 1,500m PB of 3.49.58mins when finishing as runner-up in his race.

McCrae was involved in a great battle with Newham’s Josh Trigwell, who pipped him by just 0.2 of a second.

Meanwhile, Peterborough AC’s Shaun Walton has sliced chunks off his lifetime bests this season – and he was at it again. Walton has been impressing over a range of distances this year setting new best times from 800m to 10k and his rate of improvement shows no sign of slowing.

Making his debut in a BMC event, he made the most of the swift pace in his 1,500m race to knock more than four seconds off his best for the distance and come home seventh in 4.03.09mins.

Second claim Peterborough athlete Amittai Ben-Israel was also competing in the same race as Walton and came home one place behind in 4.03.73mins, which was another personal best time.