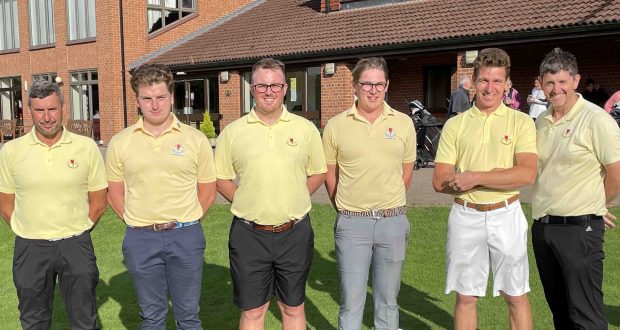 Spalding Golf Club’s impressive men’s team were victorious in the final of the Elsham foursomes event.

The team of Spencer Gooderson, Simon Richardson, Darryn Lloyd, Hugo Kedzlie, Tommy Hull and James Crampton beat Lincoln Golf Club 13up in the morning semi-final to set up the final with Woodhall Spa.

They then secured a fine victory over the defending champions to bring the trophy back to the Surfleet-based club.

Out first in the final were the young guns Kedzlie and Hull, who set the ball rolling with a fine 2up win.

Next up, the pairing of Lloyd and Gooderson went out second and lost a very competitive match 2 down.

That left everything down to the highly experienced duo of Crampton and Richardson.

They duly saw the match through, winning their duel by a very creditable 7up.

Spalding GC are also representing Lincolnshire in the English champion of champions event at Knole Park in Kent on the weekend of the September 18 and 19.

This is to determine the top amateur team in England – who will then go on to represent England in the European final.