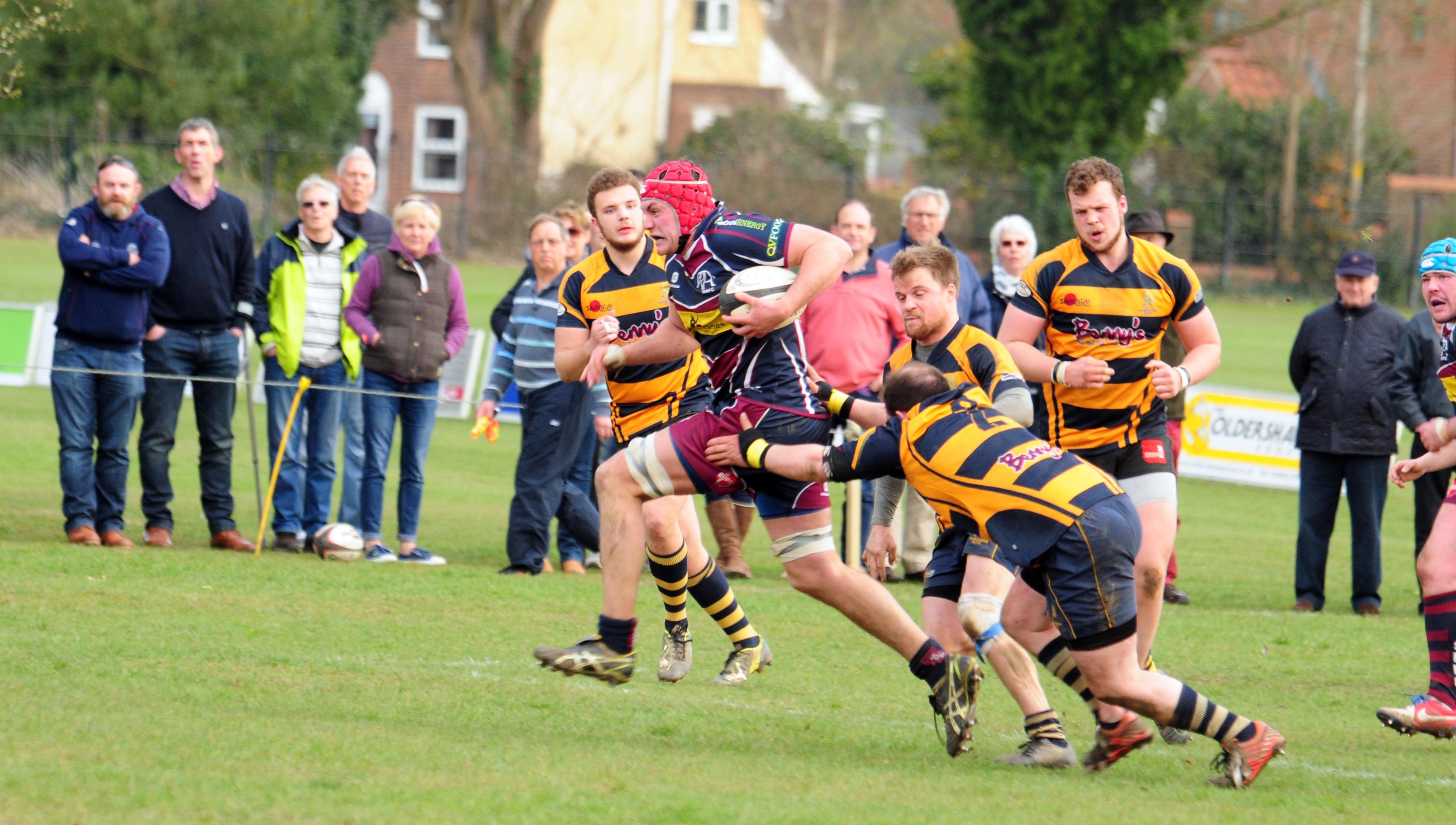 NO STOPPING US: Spalding RFC’s win over Ashbourne on Saturday put their Midlands Two East (North) survival fate back into their own hands. Photo by ADRIAN SMITH

Spalding RFC pulled off a spectacular upset on Saturday as they defeated title-chasing Ashbourne 26-19 at the Memorial Field to potentially save their season.

Defeat at the Memorial Field would have all but sentenced Town to a second-successive relegation – but their Midlands Two East (North) future is now very much in their own hands.

With relegation rivals Mansfield thrashed 48-21 at Market Bosworth, the Elephants are now three points clear of the drop zone and could secure survival with a victory at rock-bottom Bakewell Mannerians this weekend.

Ashbourne came into the game in fourth place, some five points behind the leaders with a game in hand – making them hot favourites to win Saturday’s showdown.

The early play saw both teams well organised, space being closed down quickly and not a tackle missed by either side.

The visitors were gaining the upper hand and had a decent wind advantage, allowing fly-half Paul Maznenko to kick deep into Spalding territory.

With a quarter of an hour gone Ashbourne, using their forwards to gain territory, lost the ball forward due to the intense defensive tackling and immediately, from their own five metre line,

Spalding counter-attacked using their backs. Caught by surprise, Ashbourne’s defence was thin and Harry Harrison was released on the left wing to run in the opening try from 60 metres out.

Ashbourne levelled the scores within five minutes following a good lineout win, as their forwards drove around the fringes and went over near the posts. The conversion hit the upright. 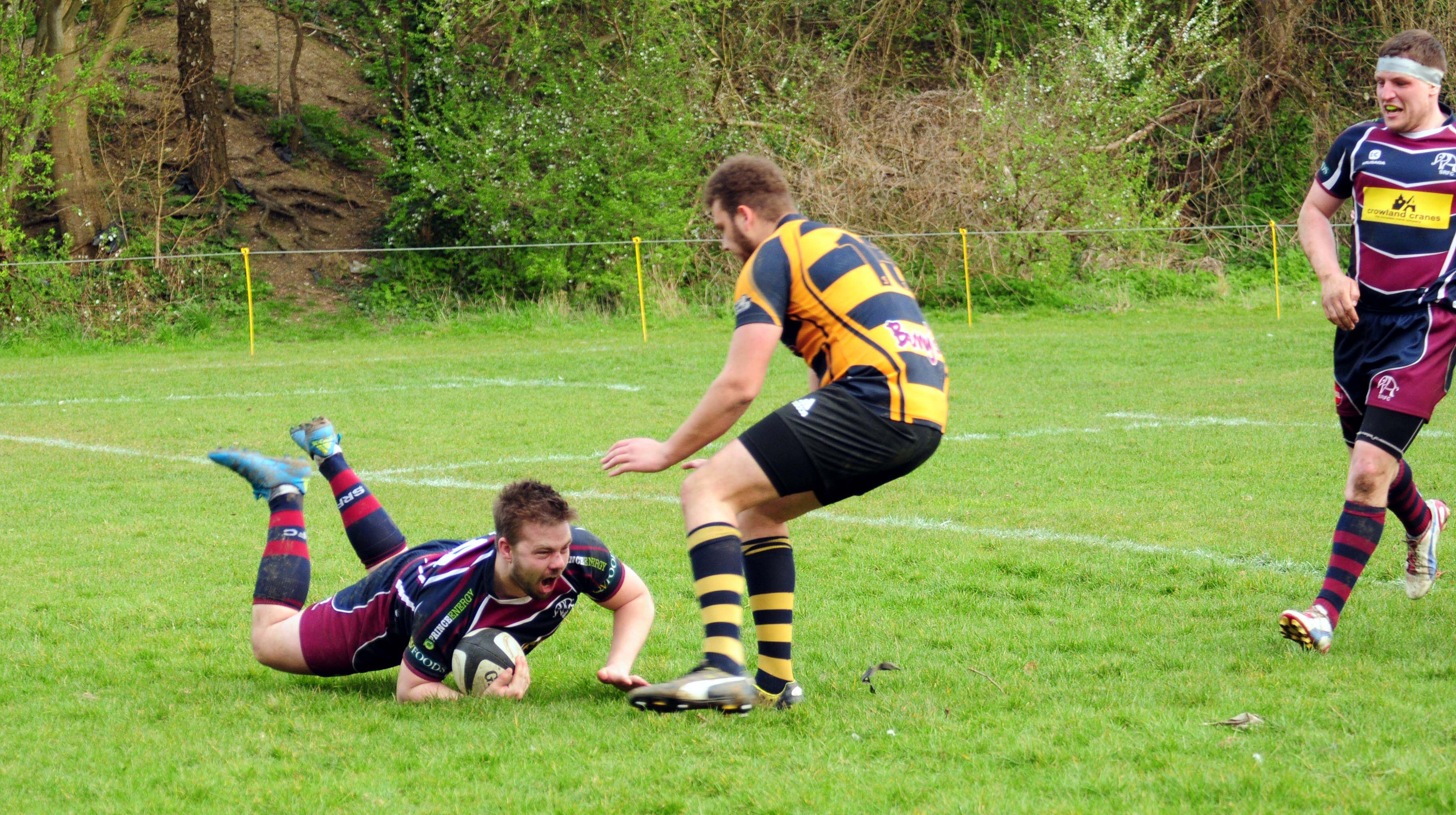 GET IN THERE! George Brown crashes over the whitewash to score for Spalding RFC on Saturday. Photo by ADRIAN SMITH

Spalding’s forwards were putting in an immense amount of work to contain Ashbourne and the backs, well organised by Sion Williams and Adam McHugh, were following suite. Again the visitors were pressing deep in to Spalding’s 22, but they infringed at the breakdown with the ball lost forward.

The referee, played advantage – and immediately a break was on. Harry Sharman sliced through a tackle and, as Ashbourne’s backs converged, he threw a long pass out to Harrison, who side-stepped his opposite number, evaded the chasing defenders and ran in another 60 metre try – which he then stepped up to convert.

There was a blow for the hosts soon after, as Ash Anker took a blow to the head as he was challenging at the breakdown and was replaced by Josh Finch at open-side flank.

Spalding then missed a penalty kick to extend their lead, but Ashourne responded with a successful penalty of their own from full-back Daniel Carter, making it 12-8 to the home side at half time.

Now with a strong breeze at their backs, Spalding started the second period brightly. With their scrum solid, led by props Mikey Watts and Keir Moore, the opportunity to kick for territory was soon taken.

However, Ashbourne responded by successfully kicking another penalty, which reduced Town’s lead to a single point.

Undeterred, Spalding’s backs were playing with confidence thanks to the platform that the forwards were giving them. With Tim Waltham and Jordan Templer prominent and both driving forward around the rucks, Ashbourne started to flag. Ash Piccaver, in typical fashion, also started to make an impact with his strong running.

With the ball well won by his forwards, scrum-half Will Shields found fly-half Williams, with a quick pass. With space and being a natural centre, his speed evaded the first tackle and cut back inside. 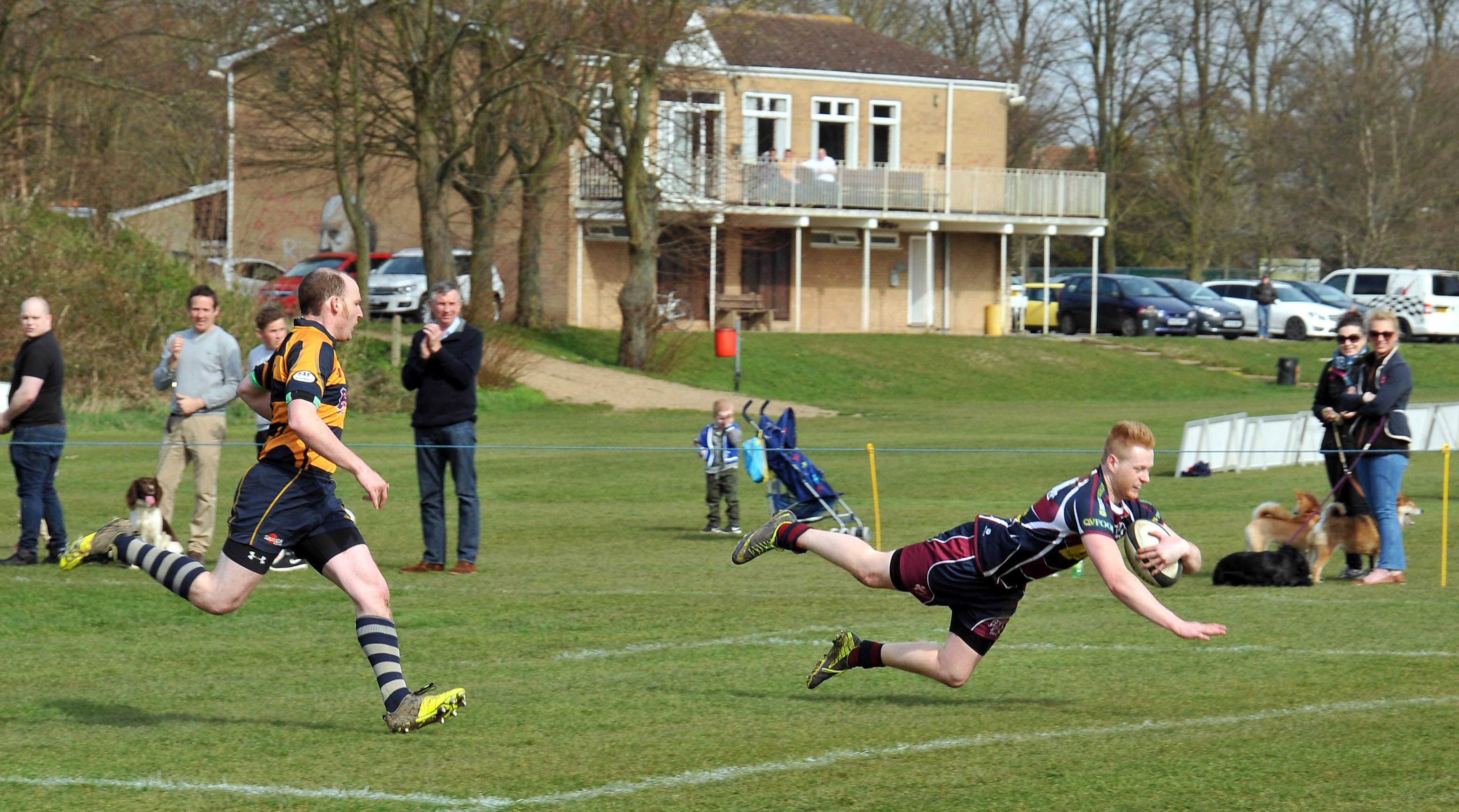 DOUBLE: Harry Harrison touches down one of his two scores on Saturday. Photo by ADRIAN SMITH

With space running out, Williams conjured up a bit of magic with sleight of hand to release a pass back to outside centre George Brown, who was also cutting back inside.

Strong running took him over the line for Harrison to convert and give Spalding some breathing space.

Ten minutes later Shields and Williams combined again. This time the scrum-half broke free around the fringes at a breakdown and quickly gained 15 metres.

As the defence closed in, a kick through was followed by Williams, who picked up and drove for the line to score.

With Harrison converting, Spalding moved into a 15-point lead with just 20 minutes to go.

In typical fashion, Ashbourne fought back using their forwards to drive the ball upfield. A kickable penalty was conceded by Spalding but, needing points, the away side kicked for touch and a lineout.

A catch and driving maul was expected and several times it looked like the Spalding defence had held out, but finally a try was secured.

In the closing minute the visitors were awarded a penalty in front of the posts for them to secure a losing bonus point, but the Elephants had done enough to clinch a game-changing victory.

With just Saturday’s Bakewell trip (2.15pm) and a home date with fellow strugglers Coalville (April 16) left to play, Town are now well-placed to stay up.