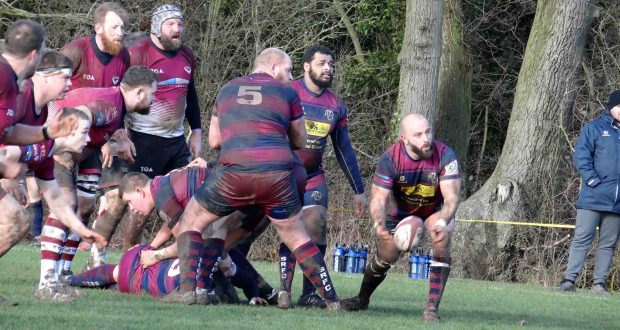 ON THE BALL: Harry Sharman in action on Saturday. Photo by JOHN CONSTABLE

Spalding RFC’s search for a first away win of the season in Midlands Three East (South) continues after a narrow 3-0 defeat at bottom-of-the-table Queens on Saturday.

In one of the lowest scoring games Town have been involved in for many years, a simple penalty kick just before half-time was the difference between the sides on wet and wild afternoon in Bedford.

The loss drags the Elephants back into the relegation battle, having moved clear in recent weeks following a run of three wins from their past four games.

Spalding were looking to keep their run going – and luckily the skies cleared as the players took to the field.

However, with standing surface water and strong winds, the elements were with the home team, who boasted a big pack of forwards.

The opening 15 minutes saw Town under constant pressure from the home side and were hardly able to get out of their own half.

Spalding had to be strong and disciplined in defence lead by captain, Pete Waudby.

With Tom Parker, Waudby and Miguel Da Silva in the front row, they surprised Queens in the scrums and held their own – occasionally putting pressure on when it was the home team’s put in.

With kicking difficult into the wind and Queens with a tall jumper in the lineout, it was Spalding’s back row of Harry Sharman, Ryan Chappell and Will Shields who were working the ball upfield with strong carries or breaks from the scrum.

However, playing good rugby was extremely difficult and the hosts had a very simple gameplan with their big and experienced forwards hitting up, setting a ruck and then repeating it as many times as possible.

On the rare occasion that Spalding could release their backs in attack, Gav Sharman showed his pace and right wing, Ben Shields, was bundled into touch, just a metre short of the try line.

The referee was not tolerating any back chat from players and Harry Cole, on for Tom Parker, fell foul to the whistle – giving away a penalty in front of the posts for Queens to knock over.

Incredibly, that would end up being the only score of the game.

With wind advantage in the second half, the scene was set for Spalding to take command.

But it was the home team, determined to build on their narrow lead, who were on the front foot.

This was a battle between the forwards and Town lock Sam Noble stood out with his determined tackling.

Indeed, the second period became a stalemate between the two teams.

The backs, with a rare move, nearly opened up the Queens’ defence with full-back James Luto coming in at speed. With no Queens cover in defence, he was unable to hold onto the ball.

Young Colt Will Stevenson came off the bench into the pack, making his first team debut and Fabian Simpson was also off the bench.

It was not until the final ten minutes that Spalding were able to sustain pressure on Queens’ try line.

Harry Sharman, Waudby and Ash Anker were all denied by the Queens forwards either killing the ball or with their big forwards standing firm with strong tackles.

The try line was tantalisingly close but not crossed to the frustration of the Spalding players and there was little consolation in the fact that they had a losing bonus point to come away with.

Town’s next league game is at home to Rushden and Higham on Saturday, March 5 with no league fixture currently scheduled for this weekend.